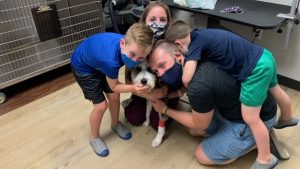 A Tampa family is overjoyed to be back with their dog, Sully.

When he went missing, his owners launched a widespread search with the help of dozens of community members. Just as they thought the situation was hopeless, Sully showed back up.

It was the reunion everyone was hoping for after the 1-year-old Bernedoodle therapy dog was being dropped off at a Tampa groomer Saturday morning but got loose and disappeared into a wooded area.

Squeals of excitement could be heard Monday when Sully reunited with his family and his best pal, 7-year-old Liam, who is a pediatric brain tumor patient. Sully helps him with anxiety by attending chemotherapy treatments and doctors’ appointments with him.

“The dog helps to calm him down and the dog is trained to lay on him much like he’s doing to me right now, such to provide that calming nature,” Liam’s mom, Laura Holland said. “Knowing Florida and knowing what’s in the woods, that was scary. He’s a little dog and trained therapy dog for our family and I honestly didn’t think he could survive in the woods.”

Holland quickly got to work posting pleas for help on social media. Soon, dozens of community members joined the search effort. She also contacted trappers who instructed her to use the family’s scent to attract Sully by leaving behind something you wouldn’t expect.

“We actually put traces of urine in the location, which again, I thought it was crazy. We put it in a bottle and we just drizzled it along the shoreline to try and give him a path to come back and it worked,” Holland said.

Monday, Sully made his way back to the very spot where he ran off three days earlier. However, when people tried to grab him, he ran off again. A driver passing by was able to stop and grab him, putting an end to the search and ultimately making the Holland family whole again.

“I looked up and it was like out of a movie. This man was walking back holding my dog in his arms. It couldn’t have been more of a dramatic, but happy ending for this whole thing,” Holland said.

Right now, the family says they’re focusing on helping Sully settle back into normal life and recover from severe dehydration. When he was found, his paws were burned as well, but he is healing well and the family says he’ll be back to normal in just a few weeks.