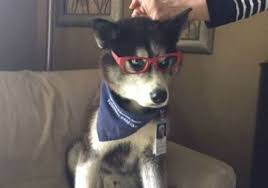 The owner of Rusty, the well-known therapy dog who comforted patients and staff at St. Boniface Hospital, has adopted a new dog, Hero, to take up Rusty’s work.

A new pup is about to fill the shoes, or paws rather, of Winnipeg’s most beloved therapy dog.

The glasses-wearing hospital therapy dog Rusty died in February, after retiring from his 10-year post at St. Boniface Hospital in November.

His owner, George Ames, decided to look for another dog with Rusty’s calm temperament who could take up Rusty’s work, comforting patients and hospital staff. He posted an ad on Kijiji a few weeks ago, looking for a dog that might be suitable, and got a response from a woman in the Selkirk area who breeds Siberian huskies.

Ames said he could tell right away that Hero had the kind and calm demeanour he was looking for in a new dog.

“He is so gentle, wants to be loved. And when we put the Rusty glasses and name tag and scarf on him, he just stood so still, and I said we have a new Rusty dog and his name is Hero.”

The part-time breeder, who had planned to keep Hero, gave Ames the dog for free, he said.

Hero is already very well-trained, Ames said, and he thinks the four-year-old dog could start doing therapy work right away.

“Plus his natural temperament is a huge asset. I just think there are some dogs that are possibly very difficult to train at this level, and he is just a gift.”

He’s planning to take his new pup into hospitals once Hero is certified and the COVID-19 restrictions are lifted.