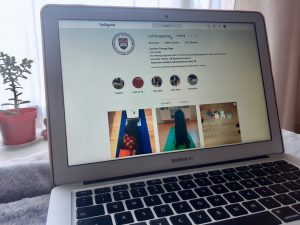 Shannon Noonan, creator of the therapy dog program, said she was trying to think of a way she could respond to students requesting virtual sessions once classes were officially relocated online.

“First I did a photo challenge for the handlers to try to sort of at least still be posting some content,” said Noonan.

However, the program’s main Instagram account was soon flooded with live video requests. “The more I started to realize, ‘Oh, this might be a long time, it might be a good idea to try something like this,’” said Noonan. “So, I began experimenting with a live session myself for the first time.”

After the piloting session, Noonan reached out to her fellow handlers within the program and provided instructions on how they too could hold virtual sessions with their pups. She said approximately seven or eight of the handlers have expressed interest in doing so.

“For them, it’s validating and brings them back to having that experience with connecting with community members,” said Noonan. “So for us, it makes sense to share it with other people and the students especially.”

Allie Davidson, handler of therapy dog Murphy, said she decided to participate because she is concerned for students.

“I am aware that this is a stressful time for a lot of people and a lot of students might not be able to get home to loved ones,” said Davidson.