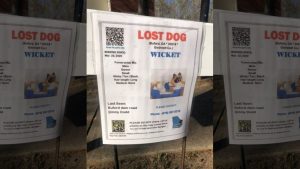 A woman in Buford is asking for the public’s help after she says a therapy dog was stolen during a home break-in on Sunday.

She said she knew something was wrong when her 11-year-old dog, Wicket, didn’t greet her a the door. Stewart said she went inside her home to find electronics missing and no sign of Wicket.

“He usually comes to the door for me to say hello and he wasn’t there,” Stewart said. “I went up to my house and to the stairs. Calling him, looking for him, opening every door, searching for him.  I just couldn’t find him, so I knew he was gone.”

She said her Papillon/Pomeranian mix would never walk away on his own because he would not go down the stairs in the garage.

“My dog will never ever go down those stairs. He stays right in my yard. I know he didn’t wander. He was picked up,” Stewart said.

Stewart is a school counselor in Hall County and Wicket is a therapy dog. She brings Wicket to Chestnut Mountain Elementary School every Friday so students are able to read to him.

Stewart said she had to get creative since schools have closed due to the Coronavirus. She set up a way for students to read to wicket through video chat.

Only a week into the program, however,  she has to explain to the students what happened.

Stewart said the students have shown their support through messages.

“It’s just one of those sweetest little things and reading their posts I know how disappointed not only am I but so are they,” Stewart said.

Wicket is a Pomeranian mix with long white, tan and black hair. He was last seen at Stewart’s home near Buford Dam Road and Jimmy Dodd.