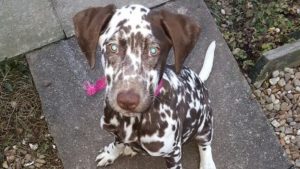 An appeal to find the dog was widely shared on social media and was backed by TV Presenter.

Chloe’s mother, Gemma Hopkins, posted on a Facebook page about the appeal that Lottie’s body had been found.

She told the BBC the family was given the news on Sunday after Lottie’s microchip was scanned by a vet.

Leicestershire Police said the dog was found in a layby in Countesthorpe – about four miles (6.4km) away from the family’s home – on Sunday morning.