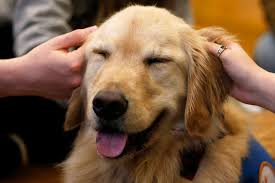 “I know that you think you are doing something good, but all of you people who are associated with therapy  dog activities are actually engaged in a form of animal abuse!”

That startling statement was made to me by a colleague who is a clinical psychologist. She went on to justify her conclusion, arguing, “I know the scientific literature says that animal-assisted therapy using dogs improves the mental state of people, but you are ignoring the stress that is imposed on the dogs that are providing the emotional support.

“Look at it this way—you are a therapy dog and suddenly this stranger is reaching out to touch you, perhaps awkwardly or roughly because of their state of anxiety or physical infirmities, and you have to allow it. Don’t you think that that might be stressful?

“Furthermore, you are put in unfamiliar environments and exposed to all sorts of unfamiliar items, such as wheelchairs, crutches, and unusual flooring such as tile or metal grids. Then there are the sudden unexpected noises around you caused by medical personnel—or if it is a group therapy session, there may be many people all talking at the same time. That kind of chaos will certainly be stressful for a dog.

“When we are training human therapists to deal with nervous and uneasy people, we recognize that the task of the therapist involves more than just relieving the anxiety and negative emotions of the patient. Individuals who are under stress radiate their negative emotions like an aura. Their negative halo is like a cloud of contagion and can raise the stress level of anyone around them—including their therapist. That means that we must train clinical psychologists in techniques that they can use to minimize their own negative emotions during therapy sessions. We know that dogs can read human emotions and they do react to them, but unlike human psychologists, therapy dogs are not trained to use methods to reduce the stress that they may be feeling. In effect, animal-assisted therapy is simply a procedure where the stress in the human is reduced at the expense of raising the stress level and emotional distress of the dogs. To my mind, it is just another case of humans deriving benefits from activities that abuse animals.”

This is not the first time that I have heard such arguments. However, if what my colleague was suggesting is true, that would raise some morally worrisome issues for people and organizations who advocate the use of therapy dogs. It is important to note that the folks involved with therapy dogs have been aware of the potential for their animals to become stressed. Most of the major organizations which certify or monitor therapy dogs provide guidelines so that dog handlers may be able to recognize stress in their canine therapists.

While most of the research involving therapy dogs has looked at the benefits derived by the human patient, recently researchers have begun to study how therapy dogs react emotionally when they are doing their work. The newest piece of research to look at levels of stress when therapy dogs are dealing with patients comes from a team of investigators headed by Stephanie Clark working in the laboratory of Arya Mohabbat at the Mayo Clinic in Rochester, Minnesota.

It involved a group of 19 certified therapy dogs. These dogs were working in a clinic for fibromyalgia patients. Fibromyalgia is a nasty disorder which is characterized by widespread muscular and skeletal pain that can be accompanied by fatigue, sleep disorders, and mood issues. There is some research that suggests that fibromyalgia actually amplifies painful sensations by altering the way a person’s brain processes pain signals. This means that these patients hurt a lot, and this pain results in stress and anxiety which the therapy dogs seem to be able to help to relieve somewhat.

One of the important features of this newest study is that it involved a number of different physiological measures of stress in the dogs. To begin with, samples of saliva were taken to measure the concentration of the hormones cortisol and oxytocin both before and after each therapy session. Cortisol levels are considered to be direct measures of stress, so elevated concentrations of cortisol are a sign of anxiety and negative feelings. High levels of oxytocin, on the other hand, are associated with positive feelings, and when the concentration of this hormone drops we assume that it indicates that an individual is experiencing a negative emotional state.

Prior to each therapy session, the dogs were also fitted out with a heart rate monitor. A variety of indicators of emotional state can be derived from measures of cardiac activity. The most important of these is simply the heart rate itself, which increases when an individual is experiencing stress. Other measures, such as heart rate variability were also recorded.

In addition, the temperature of the right ear of each dog was taken both before and after each therapy session. This might seem like a strange thing to measure—however, it makes sense because the brain processes emotions asymmetrically. Specifically, activity changes in the right hemisphere of the brain have been observed to increase when an individual is under emotional stress. This increased right hemisphere activity is reflected by a rise in the right ear temperature.

These multiple physiological measures should tell us if the therapy dogs are experiencing stress when they interact with patients.

The results of this experiment do not show any rise in the stress level of the therapy dogs as measured by changes in hormonal levels. There was no significant rise in the cortisol levels of the dogs, nor was there a drop in its counterpart oxytocin. This suggests that these dogs were not stressed by their participation in therapy sessions with patients.

Perhaps the results which would be most surprising to my colleague, and most comforting to the people who work with therapy dogs, came from the measures of heart rate and right ear temperature. Comparing the data from before and immediately following the therapy sessions, the heart rates of the dogs were reduced and there was a drop in the right ear temperature. This suggests that the dogs were actually in a more relaxed state after their interactions with the patient than they were before.

At the very least, these results show that there was no increase in stress in the dogs as a result of their therapeutic activities, and perhaps even that the dogs benefit emotionally from such interactions.

Anecdotally, I can say that my own two dogs, who sometimes serve as therapy dogs with a program in Vancouver, Canada, seem to be quite happy to get a chance to interact with people in a therapeutic setting. The moment that they see me pulling out the bag that contains the special leashes, badges, and halters that are associated with such therapy sessions, they begin to dance about near the door in what appears to me to be happy expectancy.

If my colleague had been correct, and if the data had shown that therapy dogs were suffering from stress because of their contact with anxious and fearful people, this certainly would have presented me with a moral dilemma. Fortunately, however, the data not only suggest that dogs are not stressed when they are called upon to provide emotional support to people, but they may actually feel better while they are engaging in their clinically helpful activities.