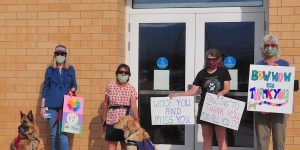 They usually can be found every day of the week, making the rounds at Heart of the Rockies Regional Medical Center (HRRMC), visiting patients and staff, bringing joy and comfort – on four legs. The Therapy Dog program returned for one day this past week, meeting staff at the hospital entrances to honor the service of first responders to this community.

The arguably very popular Therapy Dog program at  HRRMC had to be temporarily discontinued when the coronavirus pandemic known as COVID-19 arrived. The crisis arrived with a host of unknowns for medical care facilities to deal with and placing animals and their handlers in patient areas had to be halted.

In addition to postponing elective surgeries and other services, the hospital enacted strict protocols for infection prevention and sanitation procedures. It limited exposure for employees and access by the public, along with use of personal protective gear, such as masks and gloves.

While the Therapy Dog program is still on hold, several of the volunteer program participants wanted to join in the continuing community support for healthcare heroes shown over the past three months.

So on June 15, a number of the volunteers and their dogs gathered at the employee entrance of the hospital to express their appreciation with colorful signs and of course, their friendly, affectionate canines.

The program, administered by Volunteer Coordinator Kimla Robinson, has been running since 2007 and dogs have to be certified by Pet Partners and Therapy Dogs International. Dogs and their handlers have to be reliably trained and current on all immunizations.

As employees ended or arrived for their shifts at the hospital, they were greeted by sign slogans such as “We Howl for Healthcare Heroes,” “Woof You and Miss You,” “Pawsing to Thank You for All You Do,” “Bow Wow Equals Thank You,” “Hugs 4 Healthcare,” and simply “Thank You.”

The dogs did their part, of course, showing affection to the workers as they received behind-the-ear scratches and praise. Each dog also received a bag of treats from Medical Records staff by way of returning the kind gesture.

Robinson said while it’s unknown how long before the canine therapy teams can return, they are missed by staff, and were cheered by the gesture.