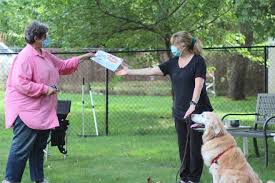 Following a 40-minute exam, Donna Mayne and Greta received not only a round of applause from those in attendance, but also a certificate from Bright & Beautiful Therapy Dogs that had the words You Passed in huge lettering.

Ann Marie Cioffi, director of NSTD, hosted the test on July 15 in her backyard.

“Greta and her owner, Donna Mayne, have worked very hard for the past year,” Cioffi said that morning via e-mail, ahead of the test. “We had a test scheduled for early April for six new members that we had to cancel due to the virus.”

NSTD serves as the Newtown chapter of Bright & Beautiful Therapy Dogs, a 501(c)(3) organization based in northern New Jersey. The organization “evaluates, tests, trains, and qualifies owners and their well-behaved dogs as therapy dog teams,” according to its website. “These teams give unconditional love, boost self-esteem, and relieve loneliness and boredom,” it continues.

All of NSTD’s activities and testing have been suspended for months due to COVID-19. During that time Greta has been ill, and turned 12.

“In order to assure that Donna and Greta realize their dream,” Cioffi said she reached out to Bright & Beautiful, who allowed “a special exception to test Greta right away.”

The test was modified to meet social distancing, mask, “and other guidelines,” Cioffi said. For one, the few women allowed to attend on July 15 were instructed to remain 12 feet apart from each other. There was also no touching of any of the dogs present that afternoon.

Wednesday afternoon, Cioffi and Mayne were joined by five NSTD volunteers for the Therapy Dog Certification Analysis. Mayne and Greta faced multiple challenges. Test elements range from an initial meeting and check of a dog’s training to advanced tasks that included canine to canine interaction and myriad human to canine interactions. Some tests included Greta’s response to a person with a cane, another checked her response to a human in a wheelchair.

One of the most challenging tests was also one of the final ones. Those present all stood up and began talking or making noises. Volunteer Maribeth Hemingway struck a small pot at intervals, adding to the cacophony.

Mayne and Greta had to walk around the circle. The challenge, Cioffi explained before the test began, was for Greta to not lose her focus on Mayne. Meanwhile, Mayne had to keep the dog’s focus without pulling on her lead.

“The dog has to be verbally under control at all times, or use hand signals. She cannot pull on the lead,” Cioffi told the group.

Mayne and Greta aced the challenge, the final of the hot afternoon, and the team became the latest official members of the localized comfort dog program.

Formed in the wake of 12/14, Newtown-Strong Therapy Dogs teams visit local healthcare and living facilities, schools, wakes, birthday parties, and other events or occasions. They go only by invitation, and they stay local. Unlike many other comfort dog programs, NSTD does not respond to emergencies. Instead, its teams offer ongoing comfort within the area.

Currently, due to COVID-19 restrictions, the team is not available for events.

With all challenges completed, Cioffi announced the successful completion of the exam.

Mayne thanked everyone for their help.

She and Greta, she said, had been working with Cioffi for two years, she reminded the group.

“Greta was rehomed to me when she was 10. We’ve come a long way, and we’ve grown so close,” she said, looking proudly at her canine companion. “Our bond is so incredible.”

Mayne admitted to feeling down when the testing was initially postponed earlier in the year.

“Thank you for doing this,” she added, turning to Cioffi. “From the bottom of my heart, thank you.”

Cioffi said she had received permission from Bright & Beautiful Founder June Golden to modify the exam.

“Usually there is a lot of hands-on work, a lot of touching, during the testing,” Cioffi mentioned. “She allowed us to modify things for today.”

Cioffi, a professional dog trainer, said she knew Greta was ready for the exam.

“She’s been on some practice runs with us, and on a few NSTD events, so I’ve seen her in action,” she told the group. “I knew she was ready for today.”