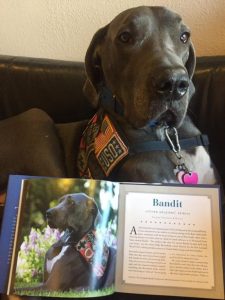 The annual, nationwide competition “searches out and recognizes America’s Hero Dogs – often ordinary dogs who do extraordinary things,” Bandit is one of 50 dogs in his category competing.

Kelly Brownfield, Western Missouri Regional Operations director of the USO and Bandit’s owner, said he almost never got the chance to thrive as a therapy dog.

“Bandit was rescued just moments before being euthanized due to some health concerns,” Brownfield said. “I happened to be at the right place at the right time and he was brought home at 14 weeks of age.”

Brownfield said she obtained permission to start bringing her new puppy to work with her when she noticed something special about him.

“We started to realize he had this unique ability to read people and sense their needs,” she said. “We would find him rolled up in the lap of a Soldier who had been crying or targeting someone in need within a crowd.”

“He was an instant hit with all the Soldiers,” Bryant said. “Bandit was a superstar – the way he immediately bonded with them was amazing. He’s always excited to meet and greet the Soldiers and especially the elementary school kids. It’s great to see their faces light up when he enters the room. He works tirelessly and asks for nothing in return.”

USO volunteer Susan Hinkle witnessed Bandit in action on many occasions and recommended he be trained as a therapy dog. At the time, the USO had no therapy dogs – Bandit became a trailblazer of sorts. The USO now has a thriving, nationwide therapy dog program.

“We never realized taking those first steps would lead to an entire program being created that would reach throughout the country,” Brownfield said. “He’s helped lead the way for so many other therapy dogs, both locally and around the country.”

“I feel a lot of that is because he was born to be who he is,” she said. “You can’t train the connection he creates with so many – it comes to him naturally.”

Bandit received advanced training so he could stand by the side of wounded Soldiers as new prosthetics were fitted.

“He stands with them at all times in case they lose their balance,” Brownfield said. “He’s their support to keep them from falling.”

He also was trained to endure loud noises, Brownfield said, which allows him to stay stoic and not flinch during a gun salute while escorting children to military funerals.

“They come from his heart,” she said. “He has touched the lives of service members on suicide watch; he has sat beside children in courtrooms testifying against abusers – one of his favorite pastimes is sitting with children as they read to him to help them work on their reading skills.”

“When I just needed some comfort or was stressed, I knew I could go to the USO and he would be there for me,” she said. “Even now, thousands of miles away while I’m in Japan temporarily, I seek out his pictures and posts on Facebook to feel that sense of relief and compassion to get me through tough times.”

After a long day at the office, Bandit enjoys playing as much as any other dog.

“As soon as you get him home and take his vest off he loves to run around with his siblings: Maverick, Apache and his favorite sibling – his cat, Lola. Even at nine years old he still has a lot of spunk left in him, especially when he pulls out his rope toys. He loves running around the house, playing tug-o-war with the other dogs.”

As ranking old timer, Bandit has been semi-retired this year – his days of traveling for work all over the country are over – though Brownfield said he’s remained very healthy for his age and size.

“We want to be mindful of the impact long hours of traveling can have on his body,” she said. “We look forward to letting him fully retire and enjoy what time he has relaxing and enjoying as much frozen custard as he wants, and taking long naps with his sidekick, Lola. He has given so much of himself and we only hope he realizes the impact he has had on so many around the world. He has forever changed the footprint of the USO for the better.”

The results of the top-three finalists for the award will be released May 28. At that time, anyone may vote for him by visiting https://herodogawards.org/dog/bandit-5/. If Bandit receives the most votes and wins the award, he’ll then go to Hollywood, California, for a televised awards ceremony. Brownfield said it would be a wonderful way to thank him for his service to the nation.

“We want his work highlighted in the hopes that people will see how you can take a rescued animal and change the world,” Brownfield said.

“Over the years, he has served as the model for all therapy dogs to follow,” Bryant added. “He has been and will always be an amazing friend to all who meet him.”