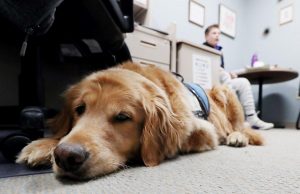 “It really relieves my stress, kind of calms me knowing that she’s here,” Evan said.

“I just love dogs,” he added, noting that having Tinker at school gives him something to look forward to. Evan, along with many other students, gets to see Tinker about four days a week at Glenview.

“I can’t wait until we have therapy dogs in every one of our schools,” said Superintendent Kristin Humphries. An elementary and middle school district, District 37 now has a therapy dog in two of its six schools — Hillcrest Elementary School and Glenview Middle.

“It changes the tenor of a building,” Humphries said. “It really can help kids calm down in different ways. I just think animals, especially dogs, make people feel good.”

Tinker has been at Glenview since before Thanksgiving, and she typically attends school three or four times a week.