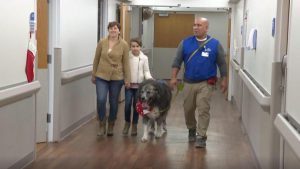 There’s a pet therapy dog at one hospital in the east that is having a big impact on patients and staff, which is hard not to, considering he weighs 175 pounds. But his size is only part of what makes him so special.

Wookie is a Caucasian Shepherd who stands about three-feet tall and is full of big, fluffy fur on his big frame.

He is one of thirteen dogs in the pet therapy program at CarolinaEast and can’t even make it down the hall without everyone stopping him.

But his mission is with the patients.

Velda Bynum is in rehab at the medical center after suffering a small stroke. She enjoys her visits with Wookie. Bynum says, “He’s great. He’s a big boy. He makes me happy. He’s a good doggie.”

Joe Zamora is Wookie’s owner and says helping people is what he lives for. Zamora says, “Most dogs are like toy driven. Wookie is just people driven. When he hears that, ‘aw,’ or the ‘what is that, look at that, he’s so big,’ his ears perk up, he stands up and he’s ready to go meet somebody.

Wookie doesn’t just meet them. He also helps them.

Kara Chadwick is the Volunteer Services Manager at CarolinaEast and says, “Wookie is a superstar.”

Chadwick says Wookie, along with the other dogs, don’t just provide an invaluable service to the patients, but to the staff as well. She says, “They are a comfort. They relieve anxiety. They provide a little bit of just joy for something that could be a stressful day for our staff, could be stressful time for family members and patients.”

It’s so much fun to watch Wookie interact with the patients and staff and see the smiles that he brings to their faces. It’s even more amazing when you hear Wookie’s story.

Zamora says, “He was found abandoned out in Boone, North Carolina kind of like roaming a farm.”

Zamora says a vet rescued Wookie and brought him back to eastern Carolina. He says, “As soon as I saw him I was like, oh I have to have this dog.”

Now Wookie is living a life unlike most Caucasian Shepherd’s. Zamora says, “They’re like Russian military working dogs. They were used to hunt bears and wolves, strong powerful animals now used in Siberia to work in prisons.”

Wookie is far from that work and using his power in a much different way, as patients and staff say, “He’s so sweet. I love Wookie.”

And Wookie loves them back.