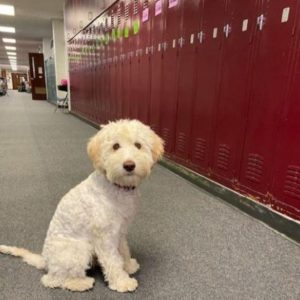 With kids learning at home, teachers are missing their students.

To stay connected to those at the James Madison Elementary School in Stevens Point, Principal Karl Bancker is using his extra time to write stories about life stuck at home, all from the perspective of his new puppy.

Bancker adopted puppy Mack right before the Safer at Home order was put in place to be used as a therapy dog for students, but now acts as the star of Bancker’s ‘Mack Books’ sent out over email to families.

Bancker’s stories all follow Mack as he navigates becoming a therapy dog, learning kids won’t be back in school, and what life is like roaming empty classrooms as the school year comes to an end.

Through pictures and simple narration, Bancker is hoping to help kids take a break and get some clarity about these uncertain times. He is also looking to introduce Mack to students who haven’t met him yet so that everyone can utilize him once school doors open again.

Bancker said it has been fun writing again as it can be hard to take time to do during the school year. The ‘Mack Books’ have even inspired others to try their hand at writing as well.

“A few kids have written some of their own books. I try to encourage them to do the same thing. Just have fun. Writing should a process that t is fun. Not just school work that you have to do, but something you enjoy doing,” Bancker said.

Overall, Bancker hopes the ‘Mack Books’ help students feel connected to school, and Mack while all are apart.