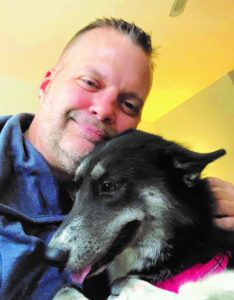 Valrico resident Michael Kurtz has been around dogs all his life.

“We had Irish setters and my dad would train them to follow commands and walk without a leash, but I never realized as a kid how important it was to train a dog,” Kurtz said. “I learn this later on in life, that a dog doesn’t just magically behave that way and it gave me a lot of respect for what my dad had done with our dog.”

Kurtz is the owner of Kurtz K9 and he offers obedience training for dogs as well as training huskies to be therapy dogs.

“When I was a kid, I started researching everything I could about dogs and how to train them,” Kurtz said. “This led me to start learning about the psychology of dogs and how they interact with humans.”

In the beginning, all of the training he did with dogs was self-taught.

“It wasn’t until 30 some years later I read the materials and got the certification you’re supposed to have to train dogs,” said Kurtz, who is ESA certified and works to rescue, rehabilitate and train large breed dogs.

Over the years, Kurtz has found that huskies make great therapy dogs for veterans who are dealing with PTSD.

“Huskies have a pack mentality and that’s what makes them so great for partnering with service men and women,” Kurtz said. “When you’re in the service, you kind of have a pack mentality where you rely on your brothers and sisters in arms to watch your back, and when they come home, they don’t have that feeling any more, especially if they are dealing with PTSD. There is just a connection with dogs that veterans don’t have with humans.”

Having a service dog became very personal for Kurtz as well. A few years ago, he was diagnosed with a brain tumor.

“I couldn’t do all the things I used to do, and having a little extra help from my dog has turned out to be absolutely invaluable to me,” Kurtz said. “It’s allowed me to continue to do things I did before I got the tumor.”