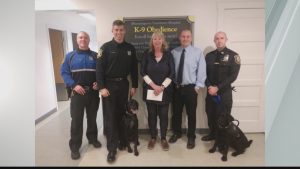 The Albany Police Department received a special honor for its therapy dog program. It will be featured in a police chief magazine.

The article on the revolutionary program was submitted by the police department in February. They just received word it will be featured in the April edition of the International Association of Chiefs of Police Magazine.

The magazine will be sent to police chiefs around the world. The article details how Maxie and Finn are now integral parts of the police department.

“The dogs are still serving as a way for us to build some bridges as well,” Albany Police Chief Eric Hawkins said. “When people in the community right now with all the stress and anxiety they are having, they see these dogs out and about — even though we still have to practice social distancing — they still want to come up and safely, you know, pet the dog.”

The program was launched last year, and both Maxie and Finn became certified therapy dogs in August 2019.