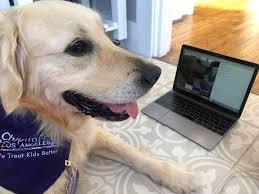 These pups won’t let a pandemic stop them from bringing a smile to young hospital patients.

At the Children’s Hospital Los Angeles, the dog therapy program has adapted to make sure their lineup of 127 four-legged friends can still visit patients, families and staff, even if via a computer screen. For the organizers — who haven’t missed a day of service in the past five years — the work-around was a must for their mission to continue.

“Our CHLA community was anxious, and we turned to innovation to help us provide something meaningful for them,” program manager Kate Buhrmaster said in a blog post, adding that the dogs use Webex video conference calls to chat with people.

So far, over 60 of the 127 dogs and their handlers have been set up with equipment to do these socially distanced visits, which have been a hit with the humans on the other end of the call.

“They were oohing and aahing at their screen,” Buhrmaster said. “Then the questions started: ‘Can you scratch him behind his ears? Can you give him a belly rub for me?’ Just seeing a relaxed doggie face on the screen looking back at you does wonders.” In the past, the L.A. program was again forced to get creative on how to reach patients they couldn’t share the room with. When they weren’t allowed to make in-person visits with those in the bone marrow transplant unit of the hospital due to strict isolation rules, they came up with an alternative.