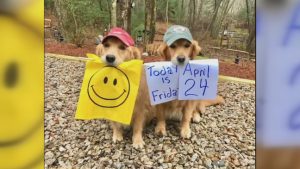 Two purebred golden retrievers that spend time in Massachusetts and Rhode Island have stolen the hearts of hundreds.

Eleven-year-old “Spencer” and his 8-year-old niece, “Penny,” are pleasant pooches that have been certified volunteer therapy dogs for years.

The pair live with their owners part-time in Wickford.

“Everybody smiles when they meet them. Everyone just falls in love with them,” said Rich Powers, their owner. “They actually go visit hospitals and schools and assisted living, funeral homes alike.”

While both are well-loved, Spencer is an internet sensation. His claim to fame happened two years ago along the streets of Boston.

“Spencer became famous in 2018. He was standing at the Boston Marathon in the pouring rain holding a flag that said, ‘Boston Strong’,” said Powers. “It was seen all over the world. People from Australia reached out asking to meet him.”

Since then, the dogs have had quite the following on social media. So Powers, who’s a professional photographer, has been sharing them with others virtually.

“I started stepping it up a little bit more lately because you know the pandemic was a little more tense, so we’re trying to do more positive feel good stuff,” said Powers. “Back in March, when we first started working from home, losing track of the days were a real thing.”

Every day since the pandemic, he asks the pair to pose for pictures.

He sometimes dresses them up or has them hold personalized signs with positive messages.

Some of the most popular pictures though, are the most simple.

“When this all started, I would put the trash out more than once on the wrong day,” said Powers. “So, with them, I started to post the date and then it was the Monday, and the date, and the year.”

Powers posts the pictures of Spencer and Penny to several community groups in Rhode Island and Massachusetts with a message like, “Good morning.”

He said the response has been overwhelming.

“I was waiting for people to say, ‘Stop doing it. It’s annoying,’ but that was not the reaction I got,” said Powers. “It was like, ‘Please keep doing it’.”

“You can’t have a bad day when you look at them,” said Powers. “I wanted to share that with others.”