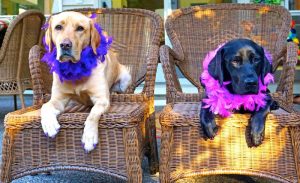 The children came home from school, closed because of the coronavirus outbreak.

“I’m definitely not a teacher,” said Camas’ Allison Vidourek, who has two daughters in Naomi, 6, and Nora, 4.

DoveLewis, a Portland veterinary hospital, has more than 80 therapy dog and handler teams. They were busy until March 13, when Oregon put its stay-at-home order in place.

It didn’t take long until both parties were back in action.

Within a week, DoveLewis had more than 20 of its therapy dog teams doing what they do best. Vidourek and other parents soon had a handy educational and entertainment aide.

For the past five weeks, DoveLewis hosts a one- hour Facebook Live event (Monday through Friday, from 1-2 p.m.) where children of all ages can read to one or more therapy dogs.

The dogs can’t hear the children, but their mere presence provides an educational spark. Nearly 13,000 people have viewed DoveLewis’ daily video, with viewers from as far away as Massachusetts.

On Tuesday, black labs Maizie, Zinc and Valor laid on a couch – though they are dogs and occasionally barked – while children from homes throughout America read aloud.

At least a couple times a week, Vidourek turns on the DoveLewis video and Naomi reads, while Nora usually listens.

For Vidourek, it eases the challenge of getting her daughter to read. It’s something new with each Facebook Live session, as different dogs show up each day.

“It’s definitely got her more excited about reading,” Vidourek said. “She’s not always thrilled to read to me or her sister. It’s been a go-to activity for us.”

Loter said one day a boy read a “Star Wars” book to one of the therapy dogs. He got to the part in the book about Wookiees, and asked the dog if he knew what they were.

“He then explained and became the teacher,” Lotery said. “It gives them confidence.”

While the Facebook project is into its fifth week, DoveLewis recently added another virtual reading-friendly opportunity for kids and therapy dogs. This one is interactive, a one-hour video conferencing session on Tuesday and Thursday mornings where children read to a therapy dog.

The Zoom rooms are interactive, with one to four children in each session. If there are multiple viewers, the dog handler manages reading time for each child.

“It’s a little more of a lifelike experience,” Loter said.

Loter says they’ve had children as old as 12 reading to the therapy dogs. Children of all reading abilities take part.

“Just because they’re doing this doesn’t mean they have a problem reading. It’s an opportunity to look forward to something,” Loter said.

The program is free, as DoveLewis’ PACTT (Portland Area Canine Therapy Teams) are funded through donations.

As a bonus for parents, Vidourek says she can step away and do household chores while her daughters are occupied reading to dogs. Vidourek said she encourages her husband to remember the 1 p.m. Facebook Live reading time when she’s away working as a nurse.