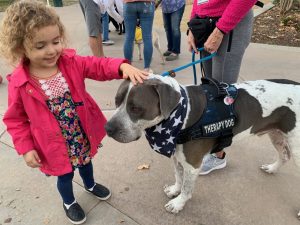 A wagging tail and wet nose can often be the perfect cure for a bad day, which is why trained comfort dogs have deployed from all over to visit Santa Clarita in order to help the community heal after last week’s deadly shooting at Saugus High School.

As soon as news of the incident began to spread, therapy dog handlers sprang into action.

“I’ve been doing this for about 20 years, so I know it helps,” handler Sandy Dubin said. “When this tragic act happened, we decided we would do our best to get all the most appropriate dogs to go wherever and whenever we’re needed.” Dubin has taken her two pups, Reese and Duchess, to schools across Santa Clarita, including Saugus High, as well as to Henry Mayo Newhall Hospital, which they often go to.

“Some it helps more than others, but when you’re faced with trauma, you don’t always want to talk about it,” she said. “Dogs pick up when people need them, and when they see someone withdrawn, will bury their heads in their laps or go over and try to cuddle them. We aren’t therapists, so we just sit back and allow our dogs to do the magic. It’s just really amazing.”

After Pam English, an area leader and puppy raiser for Guide Dogs of America who also has a certified therapy dog herself, heard that many were going to the memorial Friday, she took the puppy in training she is currently raising as well as her therapy dog to see if they could cheer some people up.

“It turned out to be a really nice day, and people were really grateful to hug a dog,” she said.

She then began working with the William S. Hart Union High School District in order to help coordinate therapy dogs’ visits at schools across the district.

“That’s all I’ve been doing since. We’ve had dogs at four of the schools so far, but we’ve had a lot more requests,” she said as of Tuesday morning. “Once the dogs get to the schools, personnel, staff and kids are all so thrilled.”

Though there have been some tears, English said the experience has been pretty rewarding.

“Some have wanted to talk while others have just wanted to sit and pet the dogs,” she added. “We’ve seen tears turn into smiles.”

Roberta Rubin, a school-based therapist at the Hart District who has a therapy dog herself, has been helping to coordinate the efforts.

“They are there to provide emotional support and to just be there for the kids to hold as a comforting presence when they are going through a hard time,” Rubin said.

Parents at many of the schools told Dubin how much the dogs were helping not just the kids, but the parents as well, she said.

“The dogs actually reduce anxiety, stress and lower our blood pressure,” said Sharon Rendall, a therapy dog instructor. “The dogs are a calming source for the children and help them tremendously.”

Many of these dogs will often come home exhausted as they take in a lot of emotions throughout the day while helping others who are struggling, Dubin added.

These efforts have been heard near and far, and GO Team Therapy/Crisis Dogs, a team based out of the San Gabriel Valley, has also responded, traveling with seven dogs to Santa Clarita for Sunday’s vigil.

“We came out for anybody that wanted to have some extra loving,” said Lucinda Bersano, one of the group’s coordinators, adding that they ran out of cards to hand out. “Some people need that extra special love.”

Nicole Graham, a volunteer at the Castaic Animal Care Center and therapy dog handler, adopted her now 2-year-old pitbull puppy Atlas from Castaic with the goal of doing something to help others.

“I wanted to show people that shelter dogs can give just as much love as any other dog,” she said, adding that Atlas has done a great job of making that happen. “Animals have a special way of reading people’s emotions without saying a word — it’s just what they do. They have magical powers.”

That magic and impact they’ve made on the community can be seen through the constant belly rubs they receive and smiles they produce.

Sherree Lois Packer has three sons, including one who was friends with Dominic Blackwell, the 14-year-old who died in the Saugus shooting.

“It’s hitting at different moments really. Sometimes I think he’s fine, and other times I wonder if it’s some sort of delayed reaction,” she said. “We are fortunate that none of my sons were on campus, but as scary as it is, just knowing it happened is traumatic for them. Their fear is real and it’s theirs.”

Though her oldest knew some of the survivors, he doesn’t want to talk about it.

“In his words, he said he just wants to get back to the new normal,” Packer said, adding that he met Reese at school this week. “He said the dog is the only person not asking how they are doing — they’re just present and there for them.

After seeing the impact Reese made on her son, she took her younger sons to the memorial to meet up with other therapy dogs, which was where they met Lil Bit, who she said was amazing.

“My sons both opened up to me last night after we visited the memorial,” she said. “And they both want to go back again tonight, so I would say those dogs have healing powers that most are unaware of.”

Packer, who is deaf, said she struggled with the incident herself, and she was surprised to see how much of an impact the dogs made on herself as well.

“For the first time in my life, I was absolutely powerless to comfort or reach my kids during that event,” she said. “Meeting up with (therapy dog) Lil Bit last night actually did a lot of healing for me, as well. I didn’t realize how anxious and nervous I had been.”

She believes the best thing she can do for her sons is to let them take the lead. “So far, all roads lead to anywhere there may be dogs. I’m just incredibly thankful there is an abundance of therapy dogs available. Their value and comfort is really understated.”