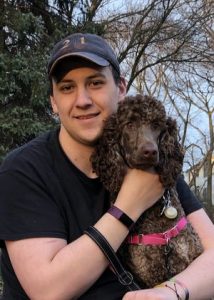 When Kyle Hansen was undergoing chemotherapy at Children’s Wisconsin, therapy dogs were what made him feel better.

“He would go from just looking miserable to his face lighting up with joy,” said Michelle Hansen, Kyle’s mom.

After being diagnosed with Stage 4 Hodgkin’s lymphoma in June 2019, Hansen was told he was eligible for a Make-A-Wish.

His wish was for his family’s 2-year-old standard poodle, Copper, to become a therapy dog.

“It’s a perfect wish for him,” Michelle said.

The Make-A-Wish team got Copper into therapy dog classes, Kyle said, and had a trainer visit his home. Now Copper is just waiting to get certified.

“It’s pretty awesome,” Kyle said. “Now, I can take my therapy dog in (to the hospital) and see more kids.”

Make-A-Wish is also granting Kyle a private shopping spree for Copper at Bark N Scratch Outpost in Milwaukee on July 23.

To give back to the organization, Kyle raised more than $2,800 for Make-A-Wish Wisconsin’s Walk For Wishes last year. He plans to do it again this year. The event will be virtual, from Aug. 22-29.

Since the founding of Wisconsin’s Make-A-Wish chapter in 1984, more than 7,100 Wisconsin families have experienced wishes, according to the organization. Besides hanging out with Copper, Kyle enjoys being on Wauwatosa East’s chess team, participating in Boy Scouts of America, and playing volleyball on the Saint Sebastian Catholic Church team.

Towards the end of Hansen’s sophomore year at Wauwatosa East, he was having trouble breathing while walking around school.

When he went to the doctor, an X-ray revealed a large mass in his chest.

After a biopsy was taken, he was diagnosed with Stage 4 Hodgkin’s lymphoma.

He underwent five cycles of chemotherapy treatment, each three weeks long, from July through October 2019 at Children’s Wisconsin’s MACC Fund Center for Cancer and Blood Disorders.

By the second round, the cancer was gone, Kyle said. The three additional cycles were to make sure of that.

“Relieved” is how Kyle and Michelle said they both feel.

“Our family is all too familiar with cancer,” Michelle said.

Her father had three primary cancers, she said, and she had a superficial skin cancer removed about five years ago.