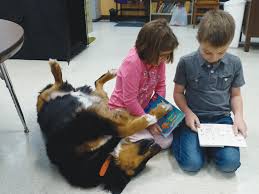 Therapy dogs have become popular in nursing homes, hospitals, funeral homes and schools. Some schools in the area have decided to add a therapy dog program to help students educationally and emotionally.

A therapy dog is trained differently than a service dog or an emotional support dog. Therapy dogs do not require specialized training but must be sociable and have basic manners. Before a dog can be certified as a therapy dog, the owner and dog must go through assessments.

Bark River-Harris’ Guidance Counselor Jan Hood owns Dixie, a labradoodle just over one year old. Dixie is not fully trained yet, but Hood already sees many times where Dixie steps into a situation and defuses it.

“She’s not in any kind of special training other than obedience training,” said Hood. “But I’ve seen some very unique things happen that she wasn’t trained for, it just happened. Two little girls were sobbing and she literally crawled up on their lap. A little boy was sick and Dixie walked up to him and rested his head on the student’s lap.”

The Escanaba School District has three therapy dogs, one at the Webster Kindergarten Center (Sparky), Lemmer Elementary (Physics), and the Upper Elementary (Camo). Teachers and administrators have seen first-hand the effects a dog can have on kids.

“I started bringing Sparky with me last year. He was a very calming force for the students I was working with,” said Webster’s Behavioral Interventionist Alycia Chernick.

Physics, a Bernedoodle in Lemmer Elementary, is cared for by school Social Worker Jennifer Reynolds. Physics is about a year and a half old and a cross between a Bernese Mountain dog and poodle. Physics recently earned his Canine Good Citizen Certificate from the American Kennel Club.

“Students who are poor readers sometimes have anxiety about reading aloud. Dogs like Physics are a non-judgmental listening ear for them and the more they can read aloud, the better their fluency,” said Reeves.

“After implementing the “7 Habits of Highly Effective People” in our schools last year, I truly believe that a dog embodies and owns these habits. Camo will be a welcoming presence in our school, as well as a leader by example,” Wender said.

Mid Peninsula’s therapy dog, Charlie, is a rescue dog. Title I teacher Mandi Lippens fostered Charlie and her puppies and found Charlie had the sweetest demeanor and decided to keep her. Lippens had a student that could not test when reading aloud. She researched how therapy animals can help students feel more comfortable reading when reading to a dog. Lippens asked Superintendent Eric VanDamme if she could bring in Charlie and see if the student would test better.

“The student not only read to Charlie, but she doubled her score that I had from the previous time. She read the page I had given her and she asked for more,” said Lippens. “It was a night and day difference from the student I had a day before.”

Lippens says since having Charlie in the school students read more. VanDamme’s son was shy and wouldn’t read out-loud, but now he will.

Research shows therapy dogs affect students in schools by increasing their confidence and improved motivation. Charlie, like the other therapy animals, comfort students when needed.

“She seems to understand, or know … we had a student yesterday who’s mom isn’t here this Christmas and so she was crying and upset, everyone was talking about all this family time, and mom and dad, Santa, … she had a meltdown. She’s in first grade,” said Lippens.

The teacher brought the student to Lippens office where the first grader told Charlie all her problems and then went back to her class.

“There’s so much more than just the reading that I feel is happening here,” Lippens said.

Lippens has a veterinarian background and understands how important it is for Charlie to have her own area to go to when she wants to.

“It’s nice to provide an animal a spot that they can go to if they need to,” said Lippens. “She’s still an animal … she likes her kennel, it’s her space. The kids know when she’s in her kennel, that’s her area. Students can pet her in her kennel, but no one is supposed to be in the kennel with her.”

Manistique Elementary has had a therapy dog program for 10 years. Linda Mason brought her dogs Max and Chip to the school voluntarily and the dogs helped students with their emotional needs. Unfortunately both dogs had to be put down for health reasons. Mason is currently training a new dog called Dot.

“I believe dogs truly encompass the important characteristics that we encourage students to develop. They can also have such a calming impact on people,” said Wender.