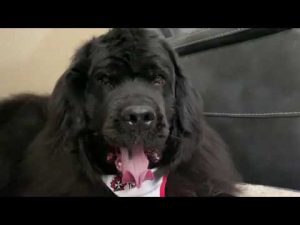 THUNDER BAY — The COVID-19 pandemic is keeping Thunder Bay’s therapy dogs from making personal visits to the people who’ve come to count on them for a bit of cheer and companionship.

Jill Biggs, coordinator of the St. John Ambulance therapy dog program in northwestern Ontario, says the clients aren’t the only ones missing the human/canine interaction.

Her own dog, she said, “hasn’t had a good belly-rub” in over a month.

“A lot of the dogs wear a bandana that says ‘St. John Ambulance’ on it when they go visiting. And most handlers have a specific collar that we use everytime we go out. When you put them on the dog, they know exactly what they’re going to be doing,” Biggs said.

Although those excursions are off-limits right now, the dogs and their owners aren’t forgetting their friends.

Many of the 50 animals enrolled in the programming are now making virtual visits.

Some are using FaceTime to connect with residents in long-term care facilities, while other dogs are “writing” to children they previously encountered in school visits.

St. John Ambulance has also posted photos and messages to clients on its Facebook page.

He’s social-distancing at home for now, as a YouTube video shows.

Biggs says all the clients St. John Ambulance has heard from in recent weeks are expressing how much they miss the dogs.

“A lot of our clients are in long-term care homes. The dogs have been visiting them for two to three years, and establish a relationship with them. Now that’s gone,” she told Tbnewswatch.

“It’s tough on everybody. We had dogs at the university, four out of five days of the week, in different locations…Every time we walked in there, the students were already waiting for the dogs,” Biggs added.

Some elementary school children who benefited from school visits by therapy dogs are receiving notes from their canine friends while classes are cancelled.

“They have pals for stories. Students who are not keen on reading will not read in front of a stranger but they will sit on the mat beside Flynn and read to her. Because we can’t do that now, some of the handlers have sent photos to the schools, and the students – instead of reading to the dogs –  are writing letters to them. And the dogs are responding in kind.”