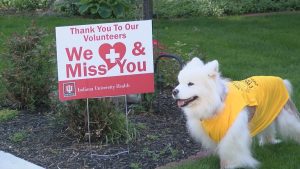 Just like many humans are missing social-interaction right now, therapy dogs are also feeling a little lonely. Some local hospitals have had visitor restrictions in-place since mid-March, unfortunately, it’s times like these where furry friends are particularly needed.

“If I take him for a ride and we drive by a hospital, he gets all squirmy and he thinks we’re going to the hospital and we’re not and he really feels bad when we pass the hospital. You can tell how he acts,” said Bob Feuer, owner of a therapy dog named Teddy. Teddy has been a therapy dog for at least 10 years.

Social-distancing laws are taking a toll on everyone but for therapy dogs like Teddy, interacting with others to brighten someone’s day is all he knows.

“Currently we’re not allowed to go into any facility, whether it be a nursing home, hospital, anything,” said Feuer. “It’s just too much of a chance of one of us catching it and they’re not sure if the dogs can transmit it.”

Teddy would visit hospitals every Monday through Friday before the pandemic. IU Health Nurse Stefanie Ridoutt, who’s currently working the COVID-19 floor, said many hospital workers are feeling the difference of not having these dogs around.

“They’re just as helpful to the staff as they are to the patients,” said Ridoutt. “There’s a lot of sadness that can happen between these walls you know, they just brighten everyone’s day.”

Caroline Hanson’s therapy dog Henry has been visiting local hospitals for four years. But as her dog is feeling these social distancing effects, so is she.

“I really miss it,” said Hanson. “The interactions with people and watching my dog bring smiles to people’s faces is really amazing.”

Feuer is worried about the long-term effects this distancing could have on therapy dogs. Right now he’s looking into temporary solutions.

“Maybe even get the dogs in our cars with the windows up and maybe drive around the hospital so maybe nurses and all can see the dogs, that might help a little bit,” said Feuer. “It’s not the same thing as being able to give a pet and everything but if there’s something we could do in the meantime we’d love to do it.”