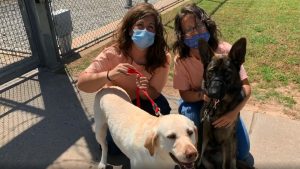 Nicholas Gaiani grinned as he narrated the lyrics to a beloved Louis Armstrong song for his furry audience on Zoom from his home in Bethesda.

“And I think to myself, what a wonderful world,” Nicholas, 6, read from the illustrated book version of the song, as he does each week during his “Read to a PAL Therapy Dog!” session.

The Washington-based nonprofit group called People. Animals. Love. has switched its in-person meetups to virtual sessions during the pandemic to serve hundreds of kids per month who are practicing reading.

No hard feelings. They’re judgment-free sessions, so dog naps are okay. And if new readers want to strut their stuff – or even if they struggle with some words – that’s all right, too.

“He’s really proud that he can read,” said Nicholas’s mother, Alissa Gaiani. “It’s really given him a platform to show that off a bit.”

PAL coordinates about 500 individually owned dogs and a few cats to provide comfort to people in places such as care facilities, libraries and prisons. During the pandemic, the young readers program moved online to keep the service going.

“We think part of the awesomeness is to see the dog on the screen,” said James Haworth, executive director of PAL, which was started in 1982 by retired veterinarian Earl Strimple.

Kids are often frightened if a teacher asks them to read in front of the classroom, but they are not intimidated by dogs, which makes the pooches a more comfortable audience.

Alissa Gaiani said her son has done many Zoom therapy sessions, and he attended an in-person session about a year ago. Her own two dogs sometimes make background appearances, but they are not nearly as exciting to Nicholas as the new dog faces.

“He’s enjoying meeting the different types of dogs, and he gets excited when he recognizes a name,” said Gaiani, 41. “He’s just been happy to read to someone other than his parents. It’s been a really good outlet for that.”

The Zoom sessions are also helping Nicholas, a kindergartner at Burning Tree Elementary School in Bethesda, cope with isolation.

“In the beginning, the kids were excited to be home. . . . Now, some of that excitement has worn off,” she said. “He misses his friends. This is something for him to look forward to – something different in his daily routine.”