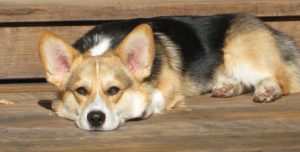 Before the COVID-19 pandemic, a corgi named Tucker spent several hours a month comforting patients at Stanford Hospital and enjoying cuddles from medical students who were having a rough day or were homesick for their own dogs.

Now, regional shelter-in-place orders have sidelined Tucker from his work as a registered therapy dog at Stanford Hospital and Stanford University. Tucker seems to enjoy the extra four walks a day with his owner, volunteer Betsy Grotte, near their San Carlos home; but she can tell he’s not pleased when she won’t let him greet his admiring fans. He doesn’t understand social distancing.

That doesn’t mean he’s lost the power to make people feel better. So, Grotte and Tucker have moved to Zoom with several other therapy dog teams to provide virtual K-9 comfort.

Owners also are using other creative ways to to extend therapy dogs’ reach during the pandemic, including using Instagram and special videos.

Martha Kessler, an executive director of finance and administration at the Stanford University School of Medicine, is the volunteer coordinator of the therapy dog visits on campus; and she organized recent Zoom events in partnership with Stanford Health Care’s PAWS program.

Kessler figured that putting dogs on camera would at least be entertaining; she also hoped it would provide emotional support during the pandemic.

Personal experience told her that some dogs are well-suited to connecting via screen. Case in point: Whenever Kessler joins a work meeting via video conference, one of her English golden retrievers, also named Tucker, butts in.

“He totally lays under the table until I get on a Zoom call. Then he has to bomb it, every time,” Kessler said. She initially shooed him away, thinking it was unprofessional to have her dog in a meeting, but, “People were like, ‘Why are you putting him down?'” she said.

Still, holding pet therapy sessions involved more than inviting interested people to a Zoom call. Trainers had to sort out a number of details: How would the audience interact with the dogs? Should owners hold the dogs? Play with them on the ground? Set them free to explore, play or even sleep during the sessions?

Nearly 80 people — a mix of university students, staff members and Stanford Health Care employees — tuned in last week for a Zoom event with about a dozen dogs.

Tucker the corgi handled the moment by lying contentedly on the couch. Viewers wished one dog, Oscar, a happy birthday, and made comments or asked questions about how dogs are selected for the program.

Unlike service dogs that are trained to assist their handlers, therapy dogs have one role: to cheer people up. Their owners are typically community volunteers whose dogs are registered with Pet Partners, a national pet therapy organization.

Before being matched to volunteer opportunities, dogs are screened for such things as temperament, adaptability and sociability with strangers. A few dogs, like Grotte’s Tucker, have additional qualities that allow them to visit patient rooms. That work requires dogs to be small enough to lie on patients’ beds, and to have a calm temperament, unlikely to be fazed by disturbances or loud noises.

Besides using Zoom, Stanford-approved pairs are finding other ways to connect.

At Packard Children’s, Pearson is collaborating with the hospital’s Sophie’s Place Broadcast Studio to produce “Weekly Dose of Donnie” video segments to play in patients’ rooms.

Donnie, a full-time facility dog donated by Canine Companions for Independence, is familiar to families and staff because she accompanies Pearson in her work preparing children for surgery.

Donnie serves as the video segment’s “host,” and last week two of her therapy dog friends made appearances, “talking” and updating young patients about their activities during their hiatus.

She said she’d love for virtual therapy to continue, even after shelter-in-place orders are lifted: “Animals lift people’s spirits, whether it’s in person or watching videos.”