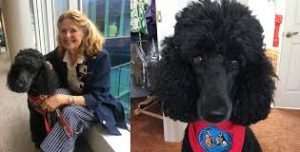 hether it’s the recent highs in the mid-90s or Sirius (the Dog Star) rising before the sun gets up, these are the dog days of summer. Our dog Midnight, for one, whiles away his days lounging first in the sun and then in air conditioning, stretched out, tongue lolling and half-asleep.

Not all dogs get to sleep all day; a special few sometimes work in the circuit courts. Lily, a 5-year old Labradoodle, is a highly trained service dog that first appeared in court in November 2019 as part of Anne Arundel County’s pilot Court Dog and Child Witness Program. Lily, accompanied by her trainer, comforted a child survivor who testified against a now-convicted abuser. Testifying in court is intimidating for most people, and can be exceptionally so for children, seated only a few feet away from the perpetrator as they recount often unspeakable things in front of strangers, all alone in the witness box.

Many centers for child abuse survivors incorporate therapy dogs into the program to comfort children and interact without judgment. There’s just something calming about petting a dog, something centering about rubbing its neck as it rests its head in your lap. But until recently, such dogs were not permitted in Maryland courtrooms.

This year, Senator Bryan Simonaire, a Republican from Pasadena, and I introduced legislation, Senate Bill 101/House Bill 311, to permit trained service dogs to accompany child witnesses throughout the state. These bills passed both the House of Delegates and the Senate unanimously, and Governor Larry Hogan signed it into law. Each county can develop its own voluntary program – here in Anne Arundel, such dogs participate in the Caring Canines program run by Dogwood Acres Pet Retreat in Davidsonville, where they must pass a Pet Partners nationwide certification program. Not only must the dogs be trained; so are the handlers, in court policies and protocols, privacy and confidentiality rules, and must pass a background check. The Caring Canines program now fields three or four calls monthly for a comfort dog in court, and Laura Ripken, the administrative judge for the Anne Arundel Circuit Court, has reviewed around 20 applications for a comfort dog to attend a child witness. All have been granted, except for one where the witness did not meet the age criteria.

Comfort dogs are available for civil cases, including divorce and protective order cases, as well as criminal matters, at all relevant stages of the proceedings. Requests for a comfort dog often come from the State’s Attorney’s Office, the child’s best interest attorney in domestic cases, or from a CASA advocate. Each case is managed to maximize fairness to both parties. Dogs and handlers are trained to behave appropriately in a courtroom. If there is a jury, the dog is situated when the jury is not in the courtroom; ideally the dog is placed outside the jury’s view, and if not, the jury is appropriately instructed. Court observers note that the presence of therapy dogs seem to promote justice. Having the dog there allows the child witness to relax a little, to decompress, and in doing so tell their story. Being more comfortable in the courtroom translates into confidence and a feeling of safety for the child witness, giving the witness the ability to open up and testify more coherently about what most likely was the worst day of their lives. Anne Arundel County reports that the pilot program incurred little to no cost to the court system, and it is anticipated that the statewide expansion will similarly incur minimal expense to the state.

While I have yet to request a therapy dog in my cases as an attorney, I can anticipate their impact. In my many years of practice, I’ve represented children who experienced sexual abuse, and also represented parents whose children testified against their abuser. Painful doesn’t begin to describe it. Such traumatized children have already experienced too much; we should do everything can do to lessen the emotional cost of justice for them. And I can relate to the pet consolation effect – all of my children, even the ones who prefer cats or even guinea pigs, come home to hug our dog and tell him about their day. While Midnight won’t be accompanying anyone to court – he’d have to get up – we all can applaud Lily and dogs like her who give solace every day to the smallest victims of all.