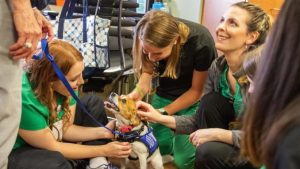 As the director of VCU Health’s Center for Human-Animal Interaction, Nancy Gee believes she has the best job in the world. Within the center is Dogs on Call, a therapy dog program for patients at VCU Health Medical Center, students and staff.

In addition to administering the program, Gee and other members of the center conduct research, publish studies and hold lectures on the interactions between humans and animals.

The program also offers events such as Paws For Stress, where the therapy dog teams visit the academic campus during midterms and finals season to interact with students.

“My own research has been with preschool kids and university students,” Gee said, “looking at how animals impact learning and how they can sort of participate in positive ways in various educational environments.”

Gee has served as the director of the center since August 2019. The center was founded in 2001 by Sandra Barker in the VCU School of Medicine’s patient psychiatry department.

“So the program itself has some really great research to substantiate why these dogs should be going into patient rooms and interacting … with patients and family who want to interact with them, and also into classrooms,” Gee said.

The program operates with 91 therapy dog teams, which each consist of one handler and one dog. Each team is allowed 10 visits per year due to the large number of volunteers and limited amount of events. Visits are limited to two hours out of safety for the dogs.

After the COVID-19 crisis escalated, the program’s patient visitations, end of the semester de-stressing programs and other appearances were canceled, putting the program on hold.

“It’s really hard for our dogs not to take them and do something, because everybody wants to do something,” said volunteer Denice Ekey. “It’s very heartwarming to see the outpouring of support for what we do. You know, we can’t visit right now, so we just keep telling them we’re looking forward to getting back.” Ekey volunteers with the center and participates in the Dogs on Call program with her dog Darcy, a beagle and Jack Russell terrier mix.

“We’ve been in rooms where there’s obvious sadness,” Ekey said. “We don’t know whether they’ve gotten a bad diagnosis or something, and she — they [dogs] don’t know that it’s a sad place. She [Darcy] just starts to do her little tricks and being who she is, and they just start laughing.”

When a patient requests a visit from the program, the hospital’s volunteer services department will record the patient name and unit number on a log for a team to come visit. Gee said the program is a way for people to reap the benefits of animal interaction without any charge to patients.

“It just warms up the room,” Ekey said. “It just gets them out of their sadness for a minute, you know. And you just feel glad to be a part of it — it’s just amazing. And sometimes they don’t want you to leave.”

“We get so much out of it that when people thank you, you want to go ‘No, thank you.’”

Ekey said she’s impressed by the program’s ability to go into almost every area of the hospital.

When talking to medical students on visits, she likes to have them guess which two areas of the hospital are off-limits for the dogs in addition to at-risk patient rooms — the operating room and the cafeteria.

Earlier this year, Dogs on Call visited the Virginia General Assembly in February from an invitation from state Sen. Ryan McDougle. The State Capitol Building is across the street from the VCU Medical Center.

As a result of Virginia’s stay-at-home order, the program hasn’t been able to conduct their studies on human and animal interaction. Gee said that not being around patients gives the center time to focus more on research and education.

The director said she feels busier than ever before with having to shift to online communication and finding ways to support medical professionals and the VCU community from afar. The center has been conducting meetings online to discuss ways to increase community outreach on social media.

“This is a small way we can let everyone know that we’re still thinking about them and just that, you know, we’re invested in their wellbeing even when we’re not physically there,” Hale said.

Hale said this also allows them to pay tribute to the healthcare workers at the medical center and their efforts to treat the virus.

“We want them to know that we’re thinking of them,” Hale said, “and that we love them and can’t wait to get back to help them, support them.”