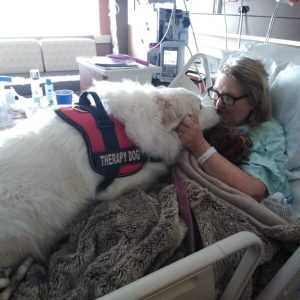 During the COVID-19 quarantine, one of the hardest parts is not being able to visit loved ones in the hospital. Restrictions prevent family and friends from visiting for the health and safety of everyone. For the people who are there for longer periods of time, it’s extremely difficult not to see anyone in person.

For Joanna Hehir from Texas, the hardest part was not seeing her dogs though. Her two Great Pyrenees, George and Fiona, are a huge part of her life. So, she wanted to see her sweet pups more than anything.

Joanna had been at the hospital recovering from a stomach ulcer for weeks. She was able to see her family and her dogs just before the lockdown started, but they hadn’t been able to visit since. As a devoted dog mom, Joanna couldn’t stand being away from her four-legged family members.

Joanna’s husband, John, could see how difficult the situation was for both Joanna and the dogs. He wanted to find a way to bring the dogs to her safely, but it seemed nearly impossible. Then, he came up with a genius idea.

“It’s been really tough on everyone. She brings light into every room, we miss her,” said John. “[The dogs are] like two huge toddlers running around the house. They don’t understand why she isn’t here.”

At first, John just planned to bring the dogs to the parking lot so Joanna could see them from her window. However, the nurse had a better idea. She suggested that they stand outside the lobby window.

When John, his son, and the two dogs came to visit, the nurse gladly skipped her lunch break so she could bring Joanna to the lobby. She brought Joanna’s wheelchair right up to the window, so all that was between her and her dogs was the glass. When George and Fiona saw their mom, they were ecstatic.While Joanna couldn’t hug her human family members or pet her furry ones, this was just as exciting for her. George and Fiona recognized her right away, and they began licking and pawing at the glass in excitement as Joanna extended her hand to them. The poor pups were unsure why they couldn’t cuddle with their mom, but they were happy to see she was okay.

“I can’t thank the nurses enough. I haven’t seen Joanna smile that big in so long,” said John. “I know they’re taking amazing care of her but just to see her doing well and to see her smiling was a relief like I can’t explain.”

Joanna still has to stay in the hospital for a while as she heals, but seeing her dogs helped lift her spirits. This entire situation has been difficult for her whole family, but John thinks that it will help them appreciate moments together more in the future. Hopefully, more people will share this positive outlook once this is all over.