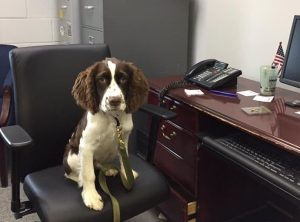 MCSO said on Facebook Caj moved to Marion when he was five months old and became the first Crime Victim Therapy Dog in the state.

Since, the sheriff’s office says Caj has “shared his love with hundreds of school children, nursing home patients and first responders of every kind.”

Most of all, the agency says Caj has helped some of their own through some of the “darkest days” of their lives.