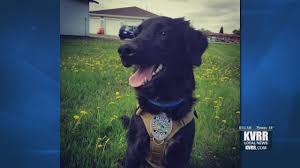 There’s a new top dog at the Dilworth Police Department, but she’s not like any police dog in the Metro.

The Dilworth Police Department says Keely is the first therapy and community service dog in the area.
She was sworn in this week.
Keely is a 10-month-old lab from a Detroit Lakes shelter.
You won’t see her chasing down bad guys.
Instead, Keely will be a fixture at community events and help people in the city during tough times.

She lives with police chief Ty Sharpe when she’s off-duty. He says, “Therapy dogs play a really big role in just well-being of officers, well-being of city staff, and the well-being of people. Her second function is to be a therapy dog and go out, see victims. If we have a traumatic event she’ll respond out there.”