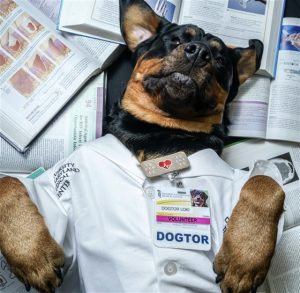 When the scrubs and white coat go on, Loki knows it’s time to work. The almost 3-year-old Rottweiler was a therapy dog at the University of Maryland Medical Center before the coronavirus pandemic. With visitation restrictions, Loki and her owner, Caroline Benzel, felt helpless. That’s when Benzel came up with a way they could help overwhlemed front line workers with “Dogtor Loki Hero Healing Kits.”

“I was trying to figure out ways to support the staff because they’re already friends of mine … They all know Loki very well,” Benzel, 30, a third year medical student at University of Maryland School of Medicine in Baltimore, told TODAY. “I rallied my neighborhood and got a bunch of donations and just called out on all of Loki’s social media and people started flooding us with donations.”

The kits include pretty much everything a hospital employee working a 12-hour shift would want, such as lip balm, baby powder, petroleum jelly, hypoallergenic lotion, tea, instant coffee and snack bars. The items just offer stressed workers a bit of comfort. They also come with a “thank you” from the pooch with a picture of her wearing scrubs. So far, Benzel distributed about 5,500 kits across the country and inspired others to make their own to share. The response was overwhelming.

But it’s what people say that touches Benzel the most. After she sent kits to a nurse manager at a California hospital for his employees, his response stunned her.

“He ended up writing me back this really beautiful long email and said he found that the people who make the best doctors aren’t necessarily the smartest people but the ones with the biggest hearts. He said he thought I would be successful,” she recalled. “I just thought that was really amazing.” Benzel raises money to make the kits. While they help health care workers smile when it’s most needed, Loki has continued working as a therapy dog  virtually. It’s even more important now as COVID-19 protocols cause patients to be isolated.

“The patients are pretty much stuck in their rooms for their own safety. So, we would sit outside in my front yard where I’m next to a golf course and there’s all this greenery and birds chirping,” Benzel explained. “I was hoping it would give them a sense of normalcy.”

Loki lays her head in Benzel’s lap while they chat. “It’s almost like Loki understands what’s going on and she hangs, which is pretty amazing,” she said. “Obviously, it doesn’t make up for not having Loki there in person. But it definitely at least shows we’re still there in spirit and support.”

When Loki worked in the hospital, she encouraged non-compliant patients to do their physical therapy, and she helped those with “white coat syndrome” relax. Seeing a 100-plus pound dog dressed as a doctor put everyone at ease.

Benzel wanted people to feel comfortable around Loki, even though she’s a breed often feared, so that’s why she decided to dress up the pooch. When she collaborated with co-workers, Loki ended up with scrubs and a custom white coat embroidered with her name on it.

“(The uniform department employees) all loved Loki and they offered to get me scrubs for her,” she explained. “There was never any question about the big black dog when she started wearing her scrubs. Everyone would just laugh when they see her walking down the hallway.”

Working with Loki in the hospital — and now virtually — also helps Benzel as she grapples with the stress of medical school and the pandemic.

“Loki was therapeutic for me being a medical student and helping me feel like I’m actually doing something that’s giving back,” she said.