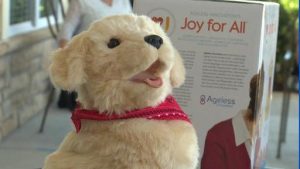 The Oak Pointe Senior Living Community in Monett includes care for patients with dementia and Alzheimer’s Disease, and on Thursday local resident Annie Lisenby Smith made a special donation to the memory-care facility.

“In honor of my grandmother, and her name is Agnes Conner, and she will be 100 in October, I wanted to give you guys a ‘Snoopy’ just like hers,” she told the staff in making the presentation. “It’s made a huge difference in her life.”

The “Snoopy” she’s referring to is a robotic dog made by Joy for All, a company that makes realistic therapy dogs and cats specifically designed for memory-care patients to provide social engagement and decrease loneliness.

With sensors in their fur, they react when petted and even have a heartbeat. The dogs bark and make cute whimpering noises while the cats purr and lick their paws.

So why are the robotic pets so important?

“As our patients lose their abilities they’re in a place they don’t recognize anymore,” explained Kathy Shepard Lanver, the Sales Director at Oak Pointe. “With dementia you use distraction measures if they’re having anxiety or having negative thoughts. Bring that little puppy in, that cat in, they completely forget about what they were anxious about.”

Annie wanted to donate a robotic dog to Oak Pointe because even though her grandmother with dementia, Agnes Conner, never lived there, Annie saw the tremendous difference a robotic dog made in Agnes’ life and wanted the patients at Oak Pointe to experience it too.

Agnes originally had a real dog named “Snoopy” but when it died her illness kept her from understanding it was gone.

So the family bought her a robotic “Snoopy” that Agnes treated like the real thing, even taking it out for potty breaks and feeding it food.

“She was force-feeding it,” Annie recalled with a smile. “Every time my dad would go and visit he had to pull bits of ham out of the dog’s mouth.”

Agnes also kept a bowl of food for her robotic dog that would be empty by the next morning, adding to Agnes’ belief that her dog was real.

But when the family set up a security camera to find out what was going on?

“They would see the neighbor’s cat slinking over the fence and coming over to eat all the dog food,” Annie said.

Then there was the time Agnes called saying “Snoopy” was sick.

“He wasn’t moving. He wasn’t barking. He wouldn’t eat anything,“ Annie recalled of the conversation. “So my uncle hopped in the car and zipped over and distracted her briefly so he could switch out the batteries. He healed ‘Snoopy’. ‘Snoopy’ was much better after that.”

Annie’s stories about Agnes are featured in a new Chicken Soup for the Soul book called “The Magic of Dogs” and Annie is hoping it will help other families dealing with loved ones who have dementia or Alzheimer’s Disease.

“Animals listen without talking back,” she said.“I don’t think she would have had the quality of life at home if she hadn’t had her therapy dog.”

“They’re still going to be able to connect to that (the pet) even when they can’t connect to people anymore,” Kathy added.

Agnes did live in her own home near Pacific, Mo. until recently when she injured her hip. Now she’s at a senior care facility near Rolla trying to keep going at the age of 99.

We wish her all the best…and so does “Snoopy”.