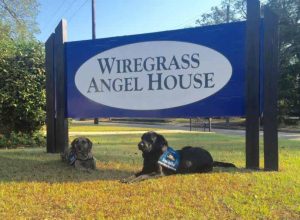 Thieves broke into a building at Wiregrass Angel House and stole supplies used to groom that agency’s therapy dogs.

Items stolen include a dryer, shampoo, brushes, clippers, ottoman and also Christmas decorations that had been stored.

“What kind of people would do something like this? This is wrong,” Linderman said.

Among other things, those animals provide comfort to children who testify in court cases.

The theft was discovered Tuesday morning.