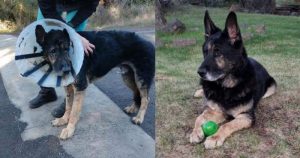 Just over a year ago, an injured, emaciated German Shepherd imprisoned in a plastic cone emerged from the woods of Mendocino County and entered the hearts and minds of the public. The dog who later came to be known as “Thunder the Wonder Dog” grew a global network of supporters who sat in wait for justice against his former owner. Last week, Mendocino County Superior Court Judge Clay Brennan sentenced Thunder’s abuser to a year probation and community service. Both Davina Liberty, the woman who found Thunder and rescued him from the woods, and Sheryl Armstrong, Thunder’s new owner, characterized the punishment as a “slap on the wrist” and they are counting on the Mendocino County District Attorney to appeal the decision and achieve justice.

On December 18, 2019, Davina Liberty, a Mendocino County coast resident, was in the woods near Caspar riding her horse when she saw a German Shepherd wearing a plastic cone and clearly injured and suffering from dehydration and starvation. She and her husband loaded Thunder into the back of a pickup truck and Thunder’s road to recovery began.

The case gained international notoriety as viral images of Thunder, clearly injured, began to circulate and an alarming story of a botched euthanasia emerged. Caspar resident Katie Rhiannon Smith emerged as the accused abuser of Thunder. The tale that emerged was one of neglect, attempted euthanasia at the end of a gun, and eventual abandonment of Thunder in the woods of coastal Mendocino County. October 2020 Smith pleaded no contest to animal abuse charges.

Smith’s sentencing hearing has once again launched the case of Thunder the Wonder Dog back into public consciousness after, as Mendocino County District Attorney David Eyster put it, Superior Court Judge Clayton Brennan “diminish[ed] ongoing community and law enforcement efforts to hold animal abusers accountable for their crimes.” Smith was sentenced to one year of probation and 500 hours of community service for her botched euthanasia and abandonment of Thunder.

Sherly Armstrong adopted Thunder after he recovered from the bullet wounds and has given him a new life. On Armstrong’s Facebook page Thunder can be seen with a healthy lustrous coat smiling for the camera and passionately playing fetch.

Reacting to Smith’s punishment, Armstrong simply said, “Katie in my opinion was NOT punished. If anything, she was rewarded.” When Judge Brennan announced Smith’s sentencing, Armstrong said she was in “absolute shock.” She said  her “hands were shaking, my heart pounding, tears sprang out of my eyes.”

Armstrong said the Mendocino County District Attorney’s Office did an “exemplary job” in their prosecution of Katie Rhiannon Smith for her abuse of Thunder, especially Deputy District Attorney Josh Rosenfeld and the Adult Probation Department. From the opening statement, Armstrong said she “had a positive feeling there would be a proper outcome.” Armstrong said Rosenfeld would always refer to the victim as “Thunder” and not “the dog” as Smith’s public defender did many times throughout the trial.

According to Armstrong, at the beginning of the trial Judge Brenna said he had received more letters than any other case he has been on. He characterized the letters as written by “animal rights activists” and Armstrong felt he said it “in a negative way.” Armstrong again noticed Judge Brennan’s language surrounding Thunder’s supporters later on in the proceedings when he called the supporters “Thunder’s Fan Club” which she perceived as trying to “cheapen them.” Armstrong said Judge Brennan made it point to say that  because the people who wrote the letters did not have all the information and evidence, therefore were not valid.”

Armstrong recounted Judge Brennan’s reading of Smith’s letter that described why she had attempted to euthanize Thunder. In the letter, Armstrong said Smith claimed Thunder bit her, her husband, and her children. The letter described the Smith family becoming isolated because they could no longer have friends due to Thunder. Smith wrote that Thunder would urinate and defecate in her home.

Liberty remembered that Smith and the Public Defender claimed that Thunder was prone to bite her, her family, and guests to their home. Liberty saw those claims as dubious because there was no evidence of scars or medical interventions that would have resulted from the violent dog they claimed Thunder to be. From rescuers’ experience with Thunder, Liberty said he was a “loving and cuddly dog.”

Armstrong said the entirety of Smith’s letter to the court read as if she  “just didn’t want [Thunder] anymore.” She also added that he has not once had an accident in the many months since Thunder has been rescued.

Armstrong said one of the most “sickening” statements she heard during the court proceedings was from the public defender who said, “If Thunder hadn’t lived, we would not be here today. She is guilty of being a lousy shot.” Recognizing the legality of a dog owner to euthanize their animal, Armstrong argued that the morality of euthanizing a pet is bound by “times of emergency when there is no way to get vet care,” saying that “none of that applies to Thunder’s situation.”

Liberty, a passionate horse rider, said she is not blind to the harsh realities of life with animals and understands the need to euthanize an animal during an emergency medical situation when an owner cannot access a veterinarian or in cases of a terminal illness. Liberty made clear that Thunder’s medical issues he was suffering from while in the hands of Smith were treatable with “medication you could get at a vet for $200.” She also emphasized the close proximity of veterinarians on the Mendocino County coast. Ultimately, she said, “this was definitely not a case where euthanasia was appropriate.”

Armstrong recounted what she said was a glaring hypocrisy in Smith’s plea for a light sentence when she requested from Judge Brennan that she not have to surrender her other dogs because she would be “devastated.” Judge Brennan complied with that request, and Armstrong fears that now Smith “can abuse as many animals as she wants.” The hypocrisy was once again on display for Armstrong when Judge Brennan suggested Smith serve her 500 hours of community service in an animal shelter where Judge Brennan argued Smith “could learn empathy.” Armstrong said she was sickened at this suggestion and questioned whether it was safe to have Smith around animals.

Armstrong described Judge Brennan suggesting that the Public Defender file a motion to reduce the defendant’s charges to a misdemeanor. Armstrong remembered the District Attorney objecting to the reduction of the charges, which was overruled. This act proved to Armstrong that Judge Brennan was not acting “fair or impartial.”

Armstrong emphasized that her criticism of Judge Brennan is “not because the sentence was not what we hoped. It was the absolute lack of impartiality, more than not being impartial, he sided and assisted the Defense.”

In the end, Armstrong thinks that Smith will serve “one year of informal, unsupervised probation.” She characterized Smith’s punishment as a “slap to Thunder and all the other abused animals that will not get justice.”

Liberty expressed concern that Smith’s probation and community punishment sets a bad precedent for Mendocino County, communicating that harsh penalties will not result for “neglecting, abusing, and abandoning an animal.”

After surviving three bullet wounds and abandonment in the Mendocino wilderness, Thunder is a “healthy, happy, and sweet boy,” said Armstrong. She characterized Thunder as loving and described him as her best buddy. At this point, she said he had gained 25 pounds by eating an organic diet. During cold weather, Armstrong said Thunder’s injuries can flare up, but he never wants to stop playing.

As Armstrong reflected on the last year, the adoption of Thunder, and the dramatic conclusion of the trial, she said, “Right now, my sweet boy is curled up by the fire. He doesn’t know the injustice that was done to him. I’m so glad he doesn’t know.. Armstrong vowed that the story of Thunder “is not over. The County of Mendocino is fighting for Thunder. It means the world that they are not just accepting this, and are pursuing justice, not only for Thunder but to hold this judge accountable.”