Tigers can catch the coronavirus 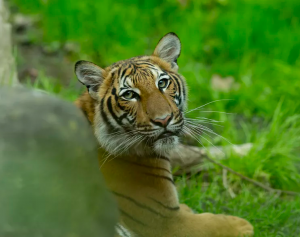 When I heard that a tiger at the Bronx Zoo tested positive for COVID-19, I started to worry about my own little lion, a tabby cat with asthma. I’ve sequestered myself away from friends and family, but could my company be unwittingly putting my cat at risk? While there have been some cases of animals contracting COVID-19, it’s rare — and there are precautions that pet owners can take if they’re worried about their furry family members.

Coronaviruses are zoonotic, which means that they can be passed between animals and humans. In New York City, the virus apparently jumped from an asymptomatic human to three lions and four tigers, including four-year-old tiger Nadia, that tested positive for the virus. The zoo says it expects all of the animals to make full recoveries.

Scientists still don’t know for sure what type of animal first passed the new virus to a person. A wet market, where animals, seafood, and produce are sold, in China was thought to be where the novel coronavirus first made the jump. But a January study found the first person known to get sick from the virus didn’t have contact with the market. Another study found that the genome sequence of the novel coronavirus infecting people was a 99 percent genetic match with one found in pangolins, one of the most trafficked mammals in Asia, according to the World Wildlife Fund. The pangolins might have been an intermediary carrying the virus from bats to humans. Another analysis found that the genome sequence of the novel coronavirus is 96 percent identical to a coronavirus found in bats, which have been identified as the origin of both SARS and MERS.

Even though the virus kicked off a pandemic by being passed from one species to another, it’s not often that coronaviruses make this kind of interspecies jump and continue spreading, according to the Centers for Disease Control and Prevention. There has been no evidence of a pet anywhere in the world transmitting COVID-19 to a person, according to the World Health Organization. The outbreaks happening now are the result of people passing the virus to one another. Despite that, some animal advocacy groups are worried that misguided fear of COVID-19 patients’ pets could lead to more animals abandoned and mistreated.

There have been a few cases of domestic cats and dogs testing positive for the virus after their owners became sick with COVID-19. A 17-year-old Pomeranian in Hong Kong tested weakly positive” in February and died in March, but the dog might have simply died of old age, according to reporting from the South China Morning Post. A two-year-old German Shepherd in Hong Kong tested positive after its owner came down with the disease, while another dog that lived in the same home didn’t. A cat in Hong Kong and another cat in Belgium have also tested positive. The cat in Belgium “showed clinical signs of digestive and respiratory disease,” according to information from the National Veterinbary Services of Belgium.

Cats might be more susceptible to COVID-19 than dogs, according to one study conducted in China that hasn’t yet been peer-reviewed. Domestic cats that had been infected with the virus by introducing samples of it through their noses were placed in kennels next to cats that were not infected. The researchers later found that one of the previously healthy cats caught the virus after being near the infected felines, most likely through respiratory droplets — the same way humans can spread the virus through coughing and sneezing. Dogs in the study, on the other hand, seemed to be more resistant to the virus and did not pass it to one another. There was no evidence that the cats shed enough of the virus to give it to people.

Those results should be taken with a grain of salt since it was a small study of animals given high doses of the virus. They don’t “represent real-life interactions between people and their pets,” virologist Linda Saif at Ohio State University in Wooster told Nature.

If you develop COVID-19, the CDC recommends avoiding cuddles, kisses, sharing food, and having other close contact with your pet to avoid passing the disease on to them. Ask someone else in your household to take care of your pet if that’s possible, and wash your hands before and after touching your pet if it’s a service animal or if you do have to care for it while you’re sick. The same guidelines apply if you think you might be sick but haven’t been tested or are waiting for results. Wearing a mask around your pet is also appropriate if you’re ill, according to the American Veterinary Medical Association.

Because the novel coronavirus can survive for some time on different surfaces, there is a slight chance that our furry friends could carry the virus even though they’re not infected. But the only study to date of how long the virus can persist on surfaces looked at plastic, metal, and cardboard — not animal fur. It’s usually harder for a virus to survive and spread to another person via a porous surface, like hair or fur, because it’s more likely to get trapped in the pores of the material, according to the American Veterinary Medical Association. The CDC points out that any animal can carry germs that might make a person sick, so whether there’s a pandemic or not, it’s a good idea to wash your hands after handling any animal, its food, or waste.

The bottom line is that we’ll probably need to take similar precautions with our pets as we do with our human loved ones. That means keeping a safe distance when necessary so that we can all stay healthy.