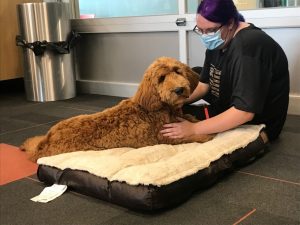 With a new school year underway, there may be students entering the year feeling anxious and overwhelmed.

Scottville Gateway 2 Success Academy also know students may be going through issues in their personal life.

“Sometimes, we see what’s happening on the outside, but there’s so much going on inside of people,” said Superintendent and Principal Jamie Bandstra. “With students that have experienced trauma, they come into a school building and they feel a lot of anxiety and stress.”

G2S wanted students to feel welcomed and supported when they come to school, and weighed the option of having a therapy dog. An anonymous donor paid for both the dog and the training.

“That kinda opened the door to go down that road,” said Bandstra. The future therapy dog needed a billet family, similar to a foster family.

“We were approached as a billet family,” said virtual learning/instruction learning coach Phil Quinlan. “My wife chose the dog. From there, we found the best breeder in the state of Michigan and the best trainer.”

The Quinlans chose a goldendoodle, and let the school name him in a poll. The winning name was Toby.

“We’re responsible for the day-to-day upkeep and love and care for the dog,” said Quinlan. “We are not the owners of the dog, the dog is a D2S student, owned by the G2S Academy.”

Toby went through eight months of training before graduating in August. Toby will be coming regularly to school by the end of September. For now, he’s getting familiar with his new job.

“He’ll be in the classrooms, he’ll be involved in counseling sessions as needed,” said Bandstra. “Could be if a student is having a hard time kind of in a crisis situation he might be part of that solution.”

The students are getting familiar with Toby, as well.

“When he came in the building this week it was really cool to see their reactions to Toby,” said Bandstra. “They kinda of lit up and were wanting to see him and pet him.”

Quinlan gets to see those reactions firsthand.

“There’s not a single head that won’t turn and will say, ‘Toby!’ or want to touch him,” said Quinlan.

Toby took a liking to one student on the first day of school.

“My grade was the first to see Toby and he just like came to me first I guess,” said 9th grader Haley Rose. “I love animals very much so he could probably tell by that.”

Toby’s connection with Haley was moving for Quinlan.

“The thing about Toby…Toby does not judge,” said Quinlan. “To see Toby connect with Haley day one, we won.”