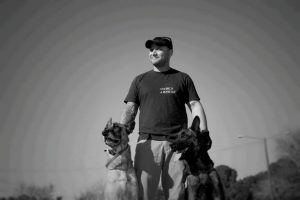 A local military veteran has transformed his passion for working with dogs into his own pet therapy business.

Enrique Marquez, who served in the United States Army, founded his dog training and rehabilitation company, Dogworx, in 2016.

He says his military career took him all over the world, including Kosovo and Iraq. Marquez’s time in the Army eventually brought him to the Savannah area, and he loved it so much that he decided to stay.

“I think it was a good place to kind of have a fresh start,” the entrepreneur told WSAV NOW.

Marquez says he’s always had a knack for working with dogs and volunteered as a dog catcher on his time off from the Army.

“Even my family members saw that whenever I interacted with a dog, it was just an instant connection, and the dog just followed me everywhere,” Marquez said. “The military was what really brought out that passion in me to the point where I saw that this is something that I could do every day.”

He says following his deployments, he encountered some personal struggles.

“My life was out of control, and when I came back, my dog was the thing that kept me in balance,” Marquez said.

“I was very close to making some bad choices when it comes to those feelings, and my dog kind of shifted my mind around on that,” he said.

Wanting to return the favor to his beloved pet, he says he worked to better train his Belgian Malinois to be more well-behaved.

“I realized that a lot of those techniques were able to be transferred onto humans, so I used them all myself,” Marquez shared, adding, “In essence, as I was training my dog, I was healing myself, I was finding answers for the problems that I had, I found different ways to go about things.”

These experiences led him to found Dogworx, allowing him to serve as a life coach and trainer for both dogs and their owners.

Marquez’s goal is to work with puppies and adult dogs that have behavioral issues, including aggression, anxiety and basic manners.

“A lot of it is really just teaching them how to make better choices, that’s really it,” Marquez said, adding that the time it trains each dog comes down to the individual animal.

“If they don’t know what the right thing to do is, how can they do that for you?” he asked.

He notes that many behaviors that people observe in their dogs are a reflection of what’s going on in their own lives.

“If your dog is aggressive, that means there’s something going on in the family that is causing that reaction, or the dog is anxious, fearful, there is a reason that’s happening,” Marquez said.

Marquez tells WSAV NOW that clients as far away as California and the United Kingdom have reached out to him for his dog therapy services.

Facebook also invited him to speak at its headquarters in 2019 for the company’s business leader’s summit.

“I was super lucky, it was a great experience,” Marquez said.

“I got to share not only my story, but the lessons that I learned along the way on how to use Facebook and Instagram, not to make sales, but to connect with people,” he said.

The dog trainer says he wants to encourage pet owners that there is hope for even the worst-behaved pet owners.

“Even though it may seem like there’s nothing that can be done, there are people that know how to help not only your dog but also help you and your family so you can all enjoy your life together,” Marquez said. “I’ve devoted my life to it.”