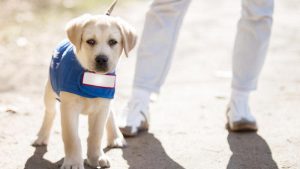 The Guide Dogs Association is the first NGO in Turkey that helps the visually impaired by providing them trained dogs, who in turn help them navigate their way.

These special pets are free of charge for applicants with more than 90 percent visual loss.

Established in 2014, with the leadership of Maggie Moore, the wife of the then UK ambassador and lawyer, Nurdeniz Tuncer, the association is a member of the European Guide Dog Federation (EGDF) and a candidate for the International Guide Dog Federation.

There are only five guide dogs in Turkey, and they have each been trained and brought up to be a companion for the visually impaired. All their expenses, such as food and veterinary care, are taken care of by the Guide Dogs Association (Rehber Kopekler Dernegi). The number will one day be added to, not least because currently, more dogs are undergoing the necessary and unique training.

The President of the Guide Dogs Association, lawyer Nurdeniz Tuncer, lives a less complicated and less impaired life thanks to Kara, Turkey’s first guide dog, whom she calls “my two eyes” and “my best friend”.

Kara, a purebred female Labrador, was born on May 21, 2015 in Istanbul. She had a year of training with a foster family in Ankara, then received further education from Alan Brooks in England for twelve weeks so that she could successfully go on to deftly guide the visually impaired in any kind of environment.

After this long and arduous education, Kara became a guide dog who could assist those with little sight in all scenarios, allowing them safe and independent movement, and help them carry out their daily tasks.

The first licenced guide dog in Turkey, Kara knows and understands the English and Turkish languages and is President Nurdeniz Tuncer’s dog. She calmly accompanies Tuncer to concerts, exhibitions, theatre productions and similar cultural, artistic and social events. She travels, the NGO materials say, comfortably and without any problems from mass transit to airplanes. During busy meeting schedules, she likes to lie down under her owner’s feet. In her free time, she likes to run, play, be petted, be brushed, sleep, and snore. She loves social activities but is a bit shy when being photographed.  Kara has been commemorated by the Turkish Postal Service (PTT), who placed her on a stamp in March 2020. The commemorative envelopes were typed with the Braille alphabet and were added to the collection within Ankara’s PTT Stamp Museum. This marks the first time guide dogs were officially recognised with a commemorative stamp in Turkey. The Guide Dogs Association in Turkey has prepared the Guide Dog Accessibility proposal for the Turkish assembly (TBMM). This law would allow guide dogs and their owners to easily walk around in social spaces and enter public and private institutions. If this law passes, the visually impaired will have more mobility, assisted by guide dogs, on many levels – from using public transport to enjoying public spaces. The law would also allow veterans with special needs to take advantage of all a guide dog can offer, and will facilitate the establishment of a school in which to raise and train these unique animals of service.

Nacho, a golden retriever born in May 2019, has been living with the Beydagi family since she was three months old. She has been with them for the past eighteen months, receiving basic training and socialising skills. After that, she will begin her twelve-week training to become a guide dog for the visually impaired. “It takes time and patience,” says Ece Beydagi, about raising a dog from being a puppy, especially one selected to become a guide dog. “She has made great strides, and now understands basic commands like sit, stay, wait, and the like.”

Beydagi says these special animals are usually golden retrievers and labradors, breeds that take well to training. If they are for some reason deemed unfit for being a guide dog, they make a ‘career change’ and become service dogs, where they are paired with differently-abled people (such as people on the autism spectrum) or become animals that help with therapy (visiting nursing homes, for example).

Nacho will now be going from the Beydagi home to her trainers. There, they will teach her how to be a responsible guide dog. “There are other dogs, who are also being raised to be guide dogs, in Istanbul, Izmir and Ankara,” Beydagi says.

Overall, Ece Beydagi and her family have had a positive experience as a foster family. “We’ve already put in our application to be a foster family again,” she says, “if the association can find us a puppy once more.”