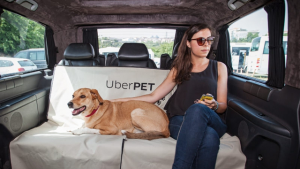 The furry friends of Australia now have a new transport option, with Uber launching a new ride sharing service for animals.

Whether it’s a trip to the vet, an outing to the park or even to hang out at the pub, Uber will now allow pets inside some of its cars.

However there’s a catch: bringing your mate along for the ride will attract a $6-$7 surcharge.

Uber says the surcharge does not apply to service dogs, which can ride along in any vehicle for no extra cost.

To avoid being slugged an extra cleaning fee, Uber advises customers to keep their pets restrained and bring a blanket or towel to reduce the risk of damage or mess.