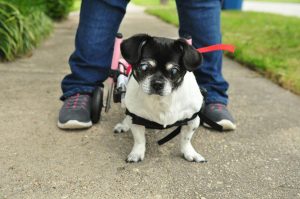 MOREHEAD CITY — A partially paralyzed, blind dog may not fit the traditional definition of a hero, but in Ann Carpenter’s eyes, Bella is that and more.

Bella is competing against 360 other canines in the therapy dog category of the 10th annual competition, sponsored by the Lois Pope LIFE Foundation.

Bella, a dog Ms. Carpenter adopted in 2018 from the local animal rescue group Misplaced Mutts, was paralyzed in the rear legs during a previous accident. She has been equipped with a special stroller that allows her to remain mobile.

Despite being paralyzed and partially blind, Bella was certified as a therapy dog through Love on a Leash in February. So far she has visited area nursing homes and the Autism Society of N.C. in Morehead City.

“I think her story inspires people,” Ms. Carpenter said Thursday. “She helps people realize it’s OK to be different and you can do anything despite the obstacles.”

Ms. Carpenter, who has been diagnosed with autism, believes in Bella’s story so much she self-published a children’s book about her dog, Bella the Wonder Dog.

“Bella does not let her disability define or limit her and I wrote the book to encourage children to embrace their differences,” Ms. Carpenter said. “She has taught me so much and has helped calm me and helped me remain grounded. I guess you could say we both know how to persevere.”

To that end, Ms. Carpenter decided to enter Bella in the therapy dog category of the competition, which involves people voting for their favorite dog in one of seven categories. The goal of the event is to identify and honor America’s bravest canine heroes and their owners and culminates in the fall with the “American Humane Hero Dog Awards” on Hallmark Channel.

The two-hour special, now in its 10th year, is broadcast in conjunction with the network’s pet adoption advocacy initiative, Hallmark Channel’s Adoption Ever After, which aims to empty animal shelters and end the country’s homeless pet epidemic, according to the organization’s website.

The nomination period for 2020 closed March 10, and the voting period has begun. First round voting began April 2 and continues through Thursday, May 7. Votes can be cast daily at hero dog awards.org.