VE Day: A tribute to the heroic dogs of the Second World War 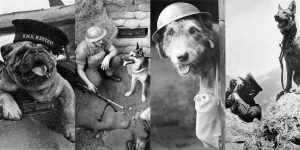 Bravery is to be commended in many forms, but some of the most unusual examples during the Second World War came from more than 3,300 of our four-legged friends. From sniffing out mines or ferrying messages to being parachuted – yes, literally – over enemy lines for search and rescue missions, dogs played a crucial role in the Allied war effort.

Particular tribute should be paid to the 18 dogs who received the PDSA Dickin Medal, the animal equivalent of the Victoria Cross – and the highest honour that can be given to a creature in military service. Recipients included Beauty, a wire-haired terrier, who found and saved 63 animals during air raids, and Judy, an English pointer, who survived a Japanese prisoner of war camp. About half the dogs made it home, but all were heroic in their own way.