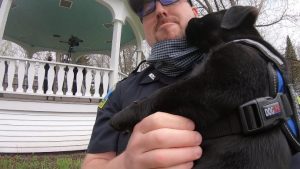 The Williston Police Department has a new addition to the force and he’s definitely a rookie.

Meet Duke– an 8-week-old English lab. He will be trained as a therapy dog.

His new partner, Ofc. Matthew Cohen, says when Duke is trained, he will be the first of his kind for a police department in Vermont.

Duke was donated along with his training, food and health care.

The kids in town named him and Duke will visit schools when students return.

Cohen says the pup is bonding with him and his family and Duke likes people.