Veteran And Her Service Dog 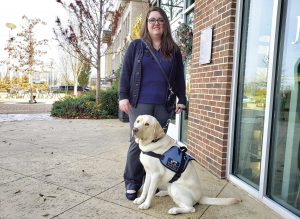 Wearing a mask and social-distancing are stressful for most people, but adding in PTSD and sexual assault provides additional strain, one Murfreesboro resident says. However, she says she is doing better thanks to her service dog, and she wants to help other veterans.

Stefanie Marvin-Miller is a wife, university student, veteran and public speaker on the topics of sexual assault in the military and service dogs. She said she was medically discharged after being diagnosed with posttraumatic stress disorder following an alleged sexual assault by a servicemember in January 2016.

As she was leaving the military with a PTSD diagnosis, she began applying to veteran service dog organizations. After sending 15 applications, Marvin-Miller said she received 11 rejection letters from organizations, which said her PTSD from sexual assault did not qualify for help – they recognized PTSD only from combat trauma, she said. Southeastern Guide Dogs of Palmetto, Fla., said “Yes.” A non-profit called Sierra Delta helped her find Southeastern. She got connected with her service dog, Leland, a yellow Lab.

Navigating the pandemic has added a layer of complexity to her life, said Marvin-Miller, a student at Middle Tennessee State University. She went from being in classes every day with thousands of people around her to “nothing,” being inside all day.

Having a service dog is a major responsibility, as it needs ongoing work to perform to keep its training fresh, she said. Staying at home meant Leland lost his job except for a few tasks around the house. She went from drilling him 10 minutes a day to one hour daily to keep him occupied. Bored working dogs tend to act out. “It’s a relationship,” she said about having a service dog.

Marvin-Miller said that for her, avoiding people is not conducive to healing.

“It’s not cathartic to me,” she said. “I really need to be around people. “I was on edge like before I got Leland.”

Furthermore, while masks may be helpful, they were a trigger for her as a sexual assault survivor, Marvin-Miller said. She said that even as she made progress in going to the grocery store or to campus, “it was like a switch flipped,” and Leland had to help. For three months after the pandemic started, she said she went out only into the yard to train him and walk in the neighborhood.

She said she began slowly going out into the public after three months. She would still have panic attacks at times in the grocery store or on campus while getting supplies. Further complicating her wearing a mask, she underwent a high-risk surgery a couple of years ago and experienced breathing issues for unknown reasons, she said.

During her time at home, she said she began sewing masks for the Murfreesboro Police Department with her husband, Joshua, and her parents, Michael and Vanessa Happel. The city recognized her work with a citizens’ award, she said. The family reached production levels of 50 masks a day and gave them away.

She said she forced herself to talk to people as they picked up the masks, giving her a social outlet. Making the masks was fun, she said. It took months of working with Leland for her to be able to go out in public and wear a mask, she said. She attends two on-campus classes this semester, so she has to visit MTSU in person.

“Leland – God bless him,” Marvin-Miller said. “He did his job every day. He knew all my signals. He took my leash and took me out of Kroger before I knew I was scared.”

One of Leland’s tasks is to sense when Marvin-Miller is about to panic, she said. At such a time, he will take his leash and walk through the nearest door. That exercise is called “find the door,” and it is something they practice as play.

Marvin-Miller said that during the pandemic, she went to work for Sierra Delta.

B.J. Ganem, founder of Sierra Delta, which is based in Wisconsin, told the Murfreesboro Post his organization focuses on any type of dog that a veteran needs. These veterans do not always need a service dog, but may just need a guide dog or a well-trained pet.

Service dogs like Leland take expensive training, and there are only about 1,000 trained per year, Ganem said. There are 18 million veterans, and 150,000 need some sort of public-access dog. Veterans are dying every day, including some who will never receive a dog.

Ganem said this mission is his passion. The Marine veteran’s left leg was blown off below the knee in Iraq in 2004, he said. He divorced, filed for bankruptcy and was angry. He said he was close to committing suicide but came across an old English bulldog, which had no training; caring for the dog gave him purpose.

Sierra Delta has helped 400 veterans, including Marvin-Miller, since being incorporated in 2017, Ganem said.

“We’re about really focusing on a relationship that the veterans can focus on too without saying they are broken,” Ganem said. “Most clients don’t need a full-service dog. But they can be better with a dog.”