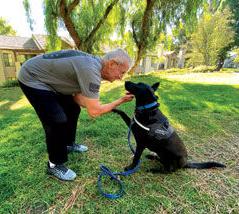 Veterans with service dogs in Chino Hills will no longer pay license fees for their animals after the city develops a program with the Inland Valley Humane Society.

Assistant city manager Rod Hill told the council Nov. 10 that he has received numerous requests over the years to waive license fees for service dogs owned by veterans.

Under the Americans with Disabilities Act (ADA), service animals must be trained to specifically assist an individual with disabilities, he said.

Emotional support, comfort and companion animals are not considered service animals under the ADA, he said.

“There are a lot of people in Chino Hills who are requesting service dogs,” he said. “Other cities waive license fees for service dogs, and I figured it would be nice for Chino Hills to do the same.”

The Marine veteran said his organization meets every Saturday from 10 a.m. to noon at Ayala Park in Chino with the goal of providing obedient, properly trained and certified service dogs to help people with disabilities and improve their quality of life.

Mr. Denzin said service dogs help veterans and others with disabilities such as seizures, diabetes, and PTSD.

There are two fees for service dogs: one is the California service dog registration fee that the Inland Valley Humane Society provides at no cost, Mr. Hill said. The second is the dog licensing fee which is collected by the Humane Society with a portion going back to Chino Hills.

Ola Madsen of Chino Hills said he is grateful for the fee waiver. The Navy veteran who served from 1968 to 1970 said he has PTSD, tinnitus, vertigo, and two recent knee surgeries.

His Belgian Malinois named “Sunshine” has been trained to sense when he gets vertigo and stands by his side. When he stands on weak knees, Sunshine stands in front of him. When going upstairs to his apartment, he grasps her tail that she holds out for him.

After Sunshine was trained at Service Animal Training, Mr. Madsen became a trainer.

Now, he works alongside Mr. Denzin and Gary Matlack to help others.