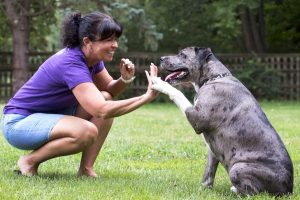 Prior to the COVID-19 pandemic, Cathy Robbins and her five-year-old therapy dog,  Finn, would visit multiple patients at Riddle Hospital in Pennsylvania a few days a week. They would share moments together comforting patients and their families — like the coma patient who physically shifted at Finn’s touch, or the patient who briefly woke from a coma to talk about Finn with Cathy. One day in mid-March day, everything changed.

Cathy and Finn were asked to visit the ICU staff, who were struggling as they watched COVID patients die daily without family members beside them.

She had to work to stay calm as they entered the hospital, where staffers had spent four hours cleaning and disinfecting the break room Finn would greet staff in. She didn’t want Finn to notice her nervousness and feed off her negative emotional energy.

The medical staffers were happy to see Finn, a staff favorite they hadn’t seen for weeks after volunteer services had been suspended. One or two staffers were allowed in at a time while social distancing.

Most of the visits were happy, with doctors and nurses saying hello and petting Finn. For others, there were layers of sadness as they shared tears. Finn walked up to one nurse and touched noses with her. That was the moment Cathy was grateful that she could do this.

It was emotional. It was happy. It was sad. Finn and Cathy stayed through it all.

“I didn’t know that that was going to be our last time in there until all of this is over.

When it became clear that taking Finn to the hospital was too risky as it could jeopardize people’s safety, Cathy began browsing a Facebook group for therapy dogs to find ideas to help patients from afar. She saw how other therapy dogs were interacting with patients by sending cards or videos. Cathy thought: Wouldn’t it be fun to have a giant life-sized Finn around the hospital?

So she had her sign-making friend, Joey, create the first Finn sign: a simple cutout of the mottled black and white mixed-breed dog Cathy rescued four years prior.

Cathy’s first glimpse of Finn was when she called him the “cutest puppy she’d ever seen” when his photo popped up in her Facebook feed. When she learned 11-week-old Finn was set to be put down, she made sure to get him on a truck that transported him across multiple states. When Finn was lifted out of the truck, Cathy says it was love at first sight.