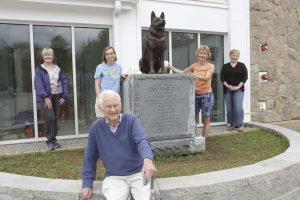 North Conway Public Library recently held an unveiling of a new monument to grace the entrance to the building, which is still in the process of a major renovation.

The construction project, which includes an addition that will double the size of the building, along with extensive renovations of the interior, is expected to be completed by Labor Day.

As part of the project, a new main entrance has been created just off the parking lot at what was the rear of the building. The monument, a bronze life-sized statue of a German shepherd sitting atop a granite cube, has been installed to the right of the entrance. With the redesign, the old front door is no longer near the circulation desk and will be used as an emergency exit only. The former side entrance from the parking lot has been removed.

Due to the COVID-19 pandemic, the unveiling on Friday, July 16, was attended only by a handful of people, including Library Director Andrea Masters; board members Paula Jones and Karen Arendt; library patron Sharon Wroblewski and Lyman Pope, lead contributor to the library’s addition and renovation project.

It was a short ceremony, without speeches, but following the event, Jones said, “It’s a wonderful day. We’re so excited to see the finished statue and thrilled for the progress of the library.”

The monument includes the inscription: “Dedicated to the memory of the war dog. Erected by Lyman Pope Jr. to honor all dogs who served as man’s best griend during World War I, World War II, Korean War, Vietnam War, and to the memory of all German shepherds, most notable among them Maximillian, 2019.”

Pope, a retired real estate developer, has donated $3 million to the project, and plans call for library will be renamed the Pope Memorial Library in his honor. He asked for the monument to war dogs to be included in the construction project.

Although the building has been closed to the public since mid-March, Pope stops by regularly to check on the progress, and was closely involved in the design of the monument, working with Nicolleti Monuments in Berlin.

“I liked working with him,” said Don Piper, who operates Nicoletti Monuments along with his son, Eric, who owns the company. “I think he reached out to us with confidence. He was interested in us building a monuement to war dogs, service dogs, police dogs, particularly German shepherds. He struck me as a very determined person who wanted to get this done.”

They began working on the project last fall, ordering the bronze statue of a German shepherd and then designing the monument for it to sit on.

“We worked to design something appropriate to the library both in size and nature,” Piper said. They settled on a 3-foot cube, raised up on a square base, both of Barre Granite from Rock of Ages quarry in Barre, Vt.

The Maximillian mentioned in the inscription was Pope’s own service dog, a German shepherd from Dresden, Germany, who died in March 2019.

“Max was with me night and day,” said Pope, but added the Max was only the last in a long line of German shepherds he has had over the years.

“I’ve always had dogs. I grew up around them,” he said. He is also a Korean War era Army veteran, and as a former serviceman, he said, he wanted people to know and appreciate the importance of dogs in the military.

Pope is well known around New England for his love of dogs and advocacy on their behalf, having helped create animal shelters in Dover; Concord; Rockland, Maine; and Orleans, Vt. North Conway Public Library is his first library, but he wanted the building to also reflect that love.

As to the switch from shelters to libraries, the 92-year-old Pope said he has lived in the Mount Washington Valley since he was a small child and he wanted to make sure the library was taken care of because it is a landmark of the village.

“It’s a wonderful library and I want to save the building. We don’t need any more restaurants or any more auto parts stores. It’s an 1890s building,” he said.

Wroblewski agreed: “I just think it was such a lovely historical building and they’ve only done a wonderful job at enhancing and creating and saving it. We have all these new buildings like the community center and the Vaughan Center — which are great — but we’ve done something very important by saving this building and enhancing it.

“I just think it’s remarkable when you drive by it in the front and in the back. It’s a blend of the old and the new,” she said.

But Pope also found a very dog-friendly environment at the North Conway Library, which has its own dog, the library director’s dog, Dusty, who often greets visitors to the building.

“This is how we started the relationship, because we both have dogs, Masters said. “Lyman always brings treats and he always comes upstairs for the history books, and my office was right next to those shelves.

“He would complain about the stairs. He’d say you have a great library, really good books, but we need an elevator. I joked, ‘Sure, give me the money and I’ll build you an elevator.’ And now, here we are.”

Most of the work on the exterior of the building is complete, and work inside — which, yes, includes an elevator — is at a point that the library is not only closed to the public but also had to halt curbside service for a few weeks.

Currently, work is being done to build a walkway to connect the two balconies in the old building.

Curbside service is tentatively scheduled to start up again in two weeks.

The building is not expected to open again to the public until construction is done in September.

“It’s just going to be great when it is done. It will be nice to have a space for the community again,” Arendt said. “We’ll be able to offer so much more.”