When Walking the Dog Is ‘a Piece of Paradise’ 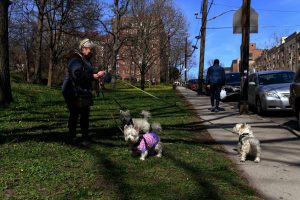 Serena Brennan, 25, a social worker at NewYork-Presbyterian Hospital, has been spending her days — many of them without a mask — tending to patients suffering from the coronavirus.

Her return home is brightened by a simple chore: walking her Border collie, Gracie.

“This is one of the small enjoyments of our life right now,” said Ms. Brennan, who was walking Gracie in Inwood Park in Upper Manhattan recently, accompanied by her husband, Bobby Brennan, 28.

He is a civil engineer who, like many New Yorkers, is working from home. He and his wife are walking Gracie so often that “it’s messing up her schedule,” Mr. Brennan said.

The coronavirus has warped life in New York City, which has 23,000 cases and at least 365 deaths, making it the epicenter of the outbreak in the United States. For some city dwellers, the necessary act of walking the dog has become a glimmer of solace during a dark time.

“We’re bombarded with gloom and doom every minute on the TV, but this is my piece of paradise,” said Roberta Strugger, who recently watched her Labradoodle, Harvey, romp in a dog run in the Bronx.

Professional dog walkers, however, are experiencing much more troubling consequences from this scenario, including loss of income and jobs.

Many dog walking services have had to let walkers go because of the lack of work.

“Most of my customers are working from home now, so they don’t need a dog walker,” said Randy Peralta, 23, a walker from the Bronx who said he went from handling 20 dogs a day to three. “A bunch of them just took the dog and headed to their second homes.”

Matt Burda, 35, a U.S. Air Force veteran and artist who works as a dog walker, said business had dropped by more than half. These days, he uses hand sanitizer frequently and wears a mask for interactions while walking. Many buildings have banned him from entering to pick up customers’ dogs, instead requiring someone to bring the animal down.