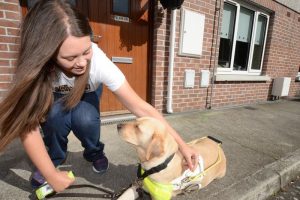 A visually impaired young woman was left horrified and embarrassed last week when two taxi drivers refused to take her guide dog into their cars.

Allie Reilly (30) was trying to get a lift home with her guide dog Evie when she approached the taxi rank in Navan, Co. Meath where the two drivers flatly refused to take her fare because of the specialised trained dog.

Allie is totally blind in her left eye and only has between 20 and 40 per cent vision in her other and getting Evie last March has completely transformed her life.

However she says she was heartbroken when the taxi drivers refused to take her expertly trained and gentle-natured dog.

“Myself and my partner Noel Farrelly went to get a taxi last Thursday evening and the first taxi driver at the top of the rank just said he didn’t take dogs, end of story,” she said.

“The driver in the next car along the rank also just waved no with both hands and said he didn’t take dogs.

“At that point, I felt so saddened and I just couldn’t believe it. They would have left me stranded.

“Thankfully Noel noticed a taxi driver at the back of the rank who had obviously seen what had happened and was flashing his lights and beckoning to us.

“He was delighted to take us home, saying that he couldn’t believe either that anyone would refuse a guide dog.

“I’ve never been refused a taxi before in my life. I was embarrassed and horrified at the time but I’m absolutely disgusted now .

“Evie cost €53,500 to train. Did they think she was going to get sick or go to the toilet in the car? I’m sure she’s much better behaved than some of the customers coming home from a night out.”

Allie whose mum is from Kilcloon in Meath lived in Celbridge, Co. Kildare before moving to Navan and reached the finals in the Kildare Rose of Tralee competition three years ago.

She pointed out that she underwent stringent evaluations before getting Evie.

“I applied for Evie in 2018 and had to go through a litany of assessments before they matched me with a guide dog earlier this year.”

“She has changed my life. She is my eyes and she has made me feel more confident when I’m out and about now.

“I really think taxi drivers should be made more aware of the huge lifelines that guide dogs are and the intensive training that they undergo before they are matched with anyone who is visually impaired.”

According to a spokesperson for the National Transport Authority: “A guide dog or assistance dog may accompany their owner free of charge.

“Guide dog owners and assistance dog owners will often carry an ID card giving their name and the name of their dog. “We would definitely encourage anyone to report incidents like this to the NTA.”

According to Léan Kennedy, Advocacy and Policy Officer for the Irish Guide Dogs for the Blind: “People who are blind or vision impaired, travelling with their guide dog, should not face difficulties when getting a taxi or hackney service.

“The door to door service they provide is a basic means of transport for people with disabilities. It is distressing to blind or vision impaired people, with a guide dog, when they are refused a service by a taxi or hackney driver.

“Taxi and hackney drivers are lawfully entitled under the Taxi Regulation Acts and the Equal Status Acts to travel by taxi without discrimination and at no extra charge for their guide dog, their essential mobility aid.

“The guide dog is highly trained and hygienic, lying in the passenger foot well, alongside its owner’s feet.”