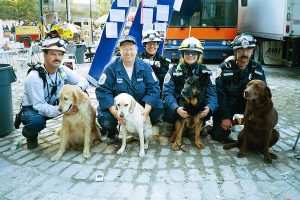 When veterinarian Cynthia Otto was in Manhattan in the wake of the 9/11 attacks helping support the search and rescue dogs, she heard rumors about the possible impact on the dogs’ long-term health.

“I was at Ground Zero and I would hear people make comments like, ‘Did you hear that half of the dogs that responded to the bombing in Oklahoma City died of X, Y, or Z?’ Or they’d say dogs responding to 9/11 had died,” she recalls. “It was really disconcerting.”

It also underscored to her the importance of collecting rigorous data on the health of dogs deployed to disaster sites. An initiative that launched in the weeks after the Sept. 11, 2001, terrorist attacks did just that, and this week, 19 years later, Otto and colleagues’ findings offer reassurance. Dogs that participated in search-and-rescue efforts following 9/11 lived a similar length of time, on average, compared to a control group of search-and-rescue dogs and outlived their breed-average life spans. There was also no discernible difference in the dogs’ cause of death.

“Honestly this was not what we expected; it’s surprising and wonderful,” says Otto, director of the School of Veterinary Medicine’s Working Dog Center, who shared the findings in the Journal of the American Veterinary Medical Association.

While postmortem results showed that dogs that deployed after the 9/11 attacks had more particulate material in their lungs upon their death, it seems this exposure didn’t cause serious problems for the animals in life. The most common cause of death were age-related conditions, such as arthritis and cancer, similar to the control group.

During and in the immediate aftermath of the 9/11 response, Otto and colleagues reached out to handlers to recruit search-and-rescue dogs into a longitudinal study that would track their health, longevity, and cause of death. They recruited 95 dogs that had worked at the World Trade Center, Fresh Kills Landfill, or Pentagon disaster sites. As a control group, they also included in the study 55 search-and-rescue dogs that had not deployed to 9/11.

As part of being involved, the dogs received annual medical examinations, including chest X-rays and blood work. When the dogs died, the researchers paid for the handlers to have veterinarians collect samples of various organ tissues and send them for analysis at Michigan State University. Forty-four of the 9/11 dogs and 19 of the control group dogs underwent postmortems. For most of the other dogs in the study, the research team obtained information on cause of death from medical records or the handlers themselves.

While the team had expected to see respiratory problems in the exposed dogs—conditions that have been reported by human first responders to 9/11—they did not.

“We anticipated that the dogs would be the canary in the coal mine for the human first responders since dogs age faster than humans and didn’t have any of the protective equipment during the response,” Otto says. “But we didn’t see a lot that was concerning.”

Otto and her colleagues have ideas for why the foreign particulate matter found in some of the dog’s lungs did not translate to ill health, though they emphasize that they’re speculations, not yet based in data.

“For the pulmonary effects, it’s somewhat easier to explain because dogs have a really good filtering system,” Otto says. “Their lungs are different—they don’t get asthma, for example—so it seems like there is something about their lungs that’s more tolerant than in humans.”

She notes that working dogs tend to be extremely physically fit compared to pet dogs, perhaps counteracting any ill effects of the deployment conditions on health. But working dog handlers and trainers can always do more to focus on fitness and conditioning, especially because doing so could slow the progression of arthritis, a disease which played a role in the death of many dogs in the study.

“We know when people stop moving, they gain weight and that puts them at a higher risk of arthritis, and arthritis makes it painful to move, so it’s a vicious cycle,” she says. “The same can be true of dogs.”

The mind-body connection may also help explain the difference between humans and dogs and the longevity of the working dogs, Otto says, as dogs don’t necessary worry and experience the same type of stress in the wake of a disaster.

“These dogs have an incredible relationship with their partners,” Otto says. “They have a purpose and a job and the mental stimulation of training. My guess is that makes a difference, too.”

Cynthia Otto is director of the Penn Vet Working Dog Center and professor of working dog sciences and sports medicine in the Department of Clinical Sciences and Advanced Medicine at the University of Pennsylvania School of Veterinary Medicine.