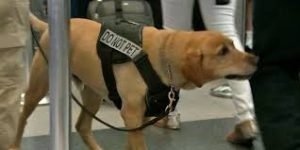 We’re pulling for Draco, the German shepherd, who’s in training to become a K-9 law enforcement officer with the police department in Cape Carteret. There’s been some budget debate about whether the town can fund Draco as an ongoing line item.

The “Draco dilemma” was described by reporter Brad Rich in the May 24 edition of the Carteret County News-Times. Let’s hope town officials get it right.

Meanwhile, the South Lyon (Mich.) Herald reminded its readers of the cancellation of the traditional Memorial Day observance at the Michigan War Dog Memorial in South Lyon this year, due to the coronavirus pandemic.

One visit to the park-like setting, and you gain a greater appreciation for the significance of military and law enforcement working dogs and all service dogs throughout America’s history.

The 2.5-acre site at South Lyon was developed as a pet burial ground in 1936 by Dr. Steve Elkow, a new veterinarian in town. He called it the Happy Hunting Grounds Pets Cemetery.

The story connects to one of the bravest military canines from the World War II era – Sgt. Sparks.

A Doberman pinscher, Sgt. Sparks had “enlisted” with the Marine Corps in 1943 and was shipped out to serve as a scout and messenger in the Pacific Theater.

Sgt. Sparks saw battle action on Bougainville Island in New Guinea, at Guadalcanal on the Solomon Islands and at Okinawa, Japan. His final station was on Guam in 1945. Sgt. Sparks was discharged in 1946 and went home to Michigan with his handler.

The dog was one of the “dignitaries” to attend a dedication ceremony later in 1946 for the unveiling of a 16-ton granite war dog monument in the South Lyon cemetery…and the official renaming of the graveyard as the Michigan War Dog Memorial.

After Sgt. Sparks died in 1947, his master requested that the dog “be wrapped only in a blanket,” like so many of his buddies on the World War II beaches…and interred at the base of the new monument.

As time marched on, the cemetery land began changing hands in the late 1970s, and the pet cemetery deteriorated from neglect.

Ownership of the land eventually transferred to Lombardo Homes, a residential development company. In 2013, CEO Tony Lombardo donated the cemetery portion of the property to a newly established nonprofit organization that agreed to take it over.

Its president, Phil Weitlauf, an Army veteran, said his group is financed entirely by private donations and no tax dollars are involved.

The board was committed to “restoring the cemetery to its former grandeur and protecting these hallowed grounds,” Weitlauf said.

The facility is now widely regarded as the “Arlington Cemetery for dogs,” said Jeff DeYoung of Muskegon, Mich., a retired Marine dog handler.

Weitlauf says: “There are about 36 war dog memorials throughout the United States, but only two memorials offer burials, one in Hartsdale, N.Y., and ours.”

Weitlauf’s organization has provided DeYoung’s dog Cena and others with a “full military honors funeral.” The established protocol is:

Bag piper, full color guard, eight German shepherds escorting the remains to the table of honor, invocation, reading of the biography, presenting a folded American flag to the handler, “Taps” by a bugler and “Amazing Grace” on the pipes.

As a finale, the German shepherds have been trained to howl on command, called a “K9 Salute to their Fallen Comrade,” for a full 30 seconds.

The military and public safety working dogs and service dogs “are our companions,” Weilauf said, “and when you bond with a dog, that dog bonds with you for life. It’s totally unconditional love.”