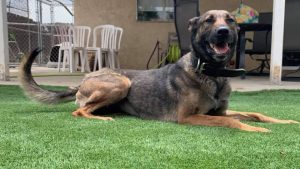 San Bernardino has had nearly three dozen police service dogs since the Police Department’s K-9 Unit was established about 42 years ago. But for four decades, the department never had a single female police canine.

Until now. The Police Department recently welcomed K-9 Bella, a 3-year-old Belgian Malinois from the Netherlands. She will be working to detect illegal narcotics as a member of the Narcotics Unit, according to a police news release.

K-9 Bella was certified last Friday after she and her handler finished a 120-hour training course on narcotic detention, as required by the state, the release read.

The police dog wasted no time putting her training to good use, helping officers find illegal drugs and recover money during a stop on the evening of her graduation.

“This was a great evening for K-9 Bella, as she already started her career with a find on her first shift,” Investigations Capt. Adam Affrunti said in the release. “I know she will be a great asset to our department and a huge benefit to our community.”

Since being established in 1978, the department’s K-9 unit has had 33 police service dogs, primarily consisting of working breeds such as Belgian Malinois, German Shepherds, Labrador Retrievers, Irish Wolfhounds, and American Bloodhounds.

Typically, law enforcement agencies choose males to serve as police dogs because of the high costs of female canines, as well as temperaments for breeding, the release stated.

“But K-9 Bella is here, and she is ready to serve San Bernardino!” police said.

When she’s off duty, K-9 Bella will be living with her handler and his family.